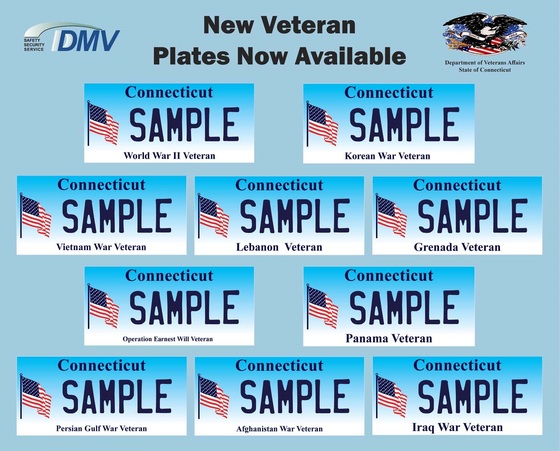 (HARTFORD, CT) – Governor Ned Lamont today announced that the Connecticut Department of Motor Vehicles is now offering 10 new license plate options for veterans that commemorate specific wartime periods, including the Afghanistan War, Grenada, the Iraq War, the Korean War, Lebanon, Operation Earnest Will, Panama, the Persian Gulf War, the Vietnam War, and World War II. These plates are offered in addition to the standard Connecticut license plate for veterans and are available exclusively for veterans who served during these specific periods of war and those who received campaign medals.

“Expanding the license plate options offered to veterans is a wonderful opportunity to honor their service,” Governor Lamont said. “Not only will it enable our state to recognize those who served during specific periods of war, but it will also serve as a consistent reminder that Connecticut is home to many thousands of veterans who have admirably served our nation. I thank all of the veterans and advocates who worked with our administration to turn this idea into reality.”

“Our military members and veterans exemplify what it means to be an American, to feel great pride for our country, to honor it, to and to work to continue to keep our great nation safe and prosperous,” Lt. Governor Susan Bysiewicz said. “We will never have the right words to fully express the gratitude we feel for their service and dedication to our country. These license plates are only a small token of our appreciation for our veterans, serving as a great way to honor them and to recognize them for their service.”

“We owe our freedoms to the men and women in the U.S. Armed Forces, past and present, especially those who have served in war and conflict zones,” Connecticut Department of Veterans Affairs Commissioner Thomas Saadi said. “These new veterans license plates recognize that service and sacrifice by Connecticut veterans in wars and conflict zones from the Second World War II to the wars in Afghanistan and Iraq. My thanks to Representative Dorinda Borer for introducing this idea, which is now law, and thanks to the Department of Motor Vehicles leadership and staff for the great collaboration with Department of Veterans Affairs in making these license plates a reality for our veterans.”

“We would not be here today if it weren’t for our veterans. Thank you for your dedication and service,” Connecticut Department of Motor Vehicles Deputy Commissioner Tony Guerrera said. “Thank you to the Department of Veterans Affairs and to Representative Dorinda Borer for advocating for Connecticut veterans.”

“We have a rich history of veteran sacrifice here in Connecticut,” State Representative Dorinda Borer (D-West Haven) said. “The designation of a war period license plate is a special way to provide our veterans with the recognition and appreciation that they so greatly deserve. I’d like to thank David Ricci, a West Haven Vietnam veteran who originally brought this request to my attention, secured hundreds of signatures from interested veterans to help draft the bill, and who strongly advocated for its passage. This bill passed with strong bipartisan support by my colleagues and I could not be more excited to see all our veterans drive with pride.”

“It seemed that there were already a number of specialty plates in Connecticut and that a specific war veteran plate would be a great way to recognize veterans,” David Ricci, president of West Haven Vietnam Veterans, Inc. and the West Haven Veterans Council, said. “Dorinda drafted the bill to include several wars, which I thought was a fantastic idea. Her determination and hard work on this bill resulted in the bill being passed by the General Assembly. I’m sure that this will be much appreciated by all Connecticut war veterans.”

The license plates are available for passenger, commercial, combination, camper, and camp trailer types, and cost $27.50. Veterans can request a new veteran plate by completing the Special Plate Application Form on the DMV’s website at portal.ct.gov/DMV-War-Vet-Plate.