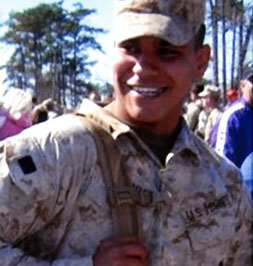 When his mother asked him three times why he wanted to be a Marine, Xhacob Latorre gave her the same answer every time.

“Because I like challenges, I like adventures and I want to defend my country,” Nicolasa LaSalle, recalled her son saying.

Xhacob (pronounced Jacob) was a 2005 graduate of Crosby High School, where he was in the ROTC for three years. He joined the Marines that June, with his mother’s permission, and deployed to Iraq twice and then to Afghanistan.

On Aug. 10, 2009, Cpl. LaTorre's legs were severely injured when an improvised explosive device detonated in the Helmand province of Afghanistan, killing a fellow Marine with whom he had been on foot patrol.

Although his legs had to be amputated, Cpl. LaTorre was making progress in recovery before an infection set in that would eventually take his life four months later. Right until the end, he never lost his knack for making people laugh, despite his severe injuries.

"You could be sad, you could be crying, but he would look for the way to make you laugh,” his mother said.