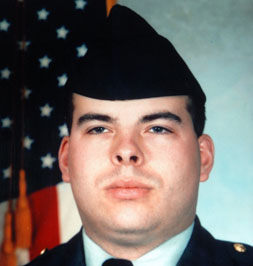 Army Chief Warrant Officer William Brennan, September 6, 1968- October 16, 2004. William was the loving husband of Kathy Martinez Brennan and father of Katelyn and Cassidy. He attended St. John the Evangelist School in Watertown and graduated in 1986 from Holy Cross High School in Waterbury where he was on the lacrosse and wrestling teams. William was an Eagle Scout and a member of the Pine Meadow, Connecticut 4-H Club. While attending Mattatuck Community College he was serving in the National Guard and Reserves.

After receiving his associate's degree, he joined the United States Army and pursued his dream of flying helicopters. He served in the Armed Forces for 13 years. Besides his work in Bosnia and Iraq, Brennan also flew surveillance helicopters in New York City after the Sept. 11, 2001 terrorist attacks. Assigned to the 1st Battalion, 25th Aviation, 25th Infantry Division (Light), Wheeler Army Air Field, Hawaii; he was killed when his OH-58D Kiowa Warrior helicopter collided with another OH-58D helicopter and crashed in Baghdad.