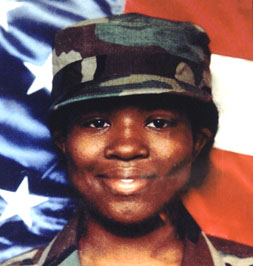 Army Specialist Tyanna Avery-Felder, November 21, 1981- April 7, 2004, died two days after she was wounded by a roadside bomb in Iraq, she was 22 years old at the time. She grew up in Bridgeport and attended Kolbe Cathedral High School, where she played basketball and sang in the choir. Avery-Felder took classes at Southern Connecticut State University in New Haven, but after completing her freshman year, she joined the Army. She got married on December 20, 2002 to a soldier, Adrian Felder, who she met in Fort Lewis, Washington.

A year after the wedding, Avery-Felder was shipped out for Iraq with the Stryker Brigade where she was a cook. Her death happened a week before she was scheduled to go on leave to visit her family in Bridgeport. She is the first woman soldier from Connecticut to die in the war in Iraq. She was awarded both the Purple Heart and the Bronze Star.