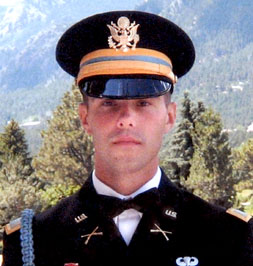 First Lieutenant Thomas J. Brown, born in New Haven, Connecticut on March 13, 1982, was killed in action on September 23, 2008 in Salman Park, Iraq when his patrol came under small arms fire. Brown graduated from George Mason University in 2004 with a Bachelor of Arts degree in Government and International Politics and joined the Army in 2005.

Brown completed basic training at Fort Jackson, SC. He graduated from Officer Candidate School at Fort Benning, GA and was commissioned a Second Lieutenant Infantry Officer on April 13, 2006. He completed the Infantry Officer Basic Course as well as the Mortar Leaders School, both at Fort Benning. He also attended Ranger School and earned his Ranger Tab, as well as obtaining Airborne Wings. He was assigned to the 2nd Battalion, 6th Infantry Regiment, 2nd Brigade Combat Team of the 1st Armored Division out of Germany.

His unit deployed to Iraq on April 3, 2008. He was awarded the Bronze Star, the Purple Heart, and the Combat Infantry Badge posthumously.