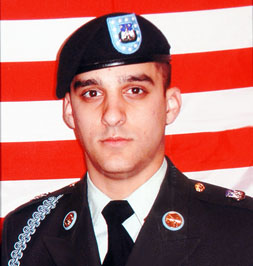 Army Sgt. Steven DeLuzio loved to make others laugh, but his family says he is best described as a tenacious defender both in and out of uniform.

Co-captain of the 2003 state champion Glastonbury High School hockey team, DeLuzio loved playing and talking sports and had a reputation as the “ultimate teammate.” Tattooed on his back was the Army infantry slogan: “Follow Me.”

“He was protective, loving, compassionate and always a defender,” reads a family memorial tribute. “Whether it was hockey, baseball or as a soldier, he tried to protect others from harm.”

DeLuzio and his older brother Scott had joined the Army in response to the terrorist attacks on Sept. 11, 2001. He was scheduled to return home for good not long before his death during a firefight in Paktika Province, Afghanistan on Aug. 22, 2010.

“He always took the most dangerous assignments," said his father, Mark DeLuzio. "He could have come home, but he re-upped because he didn't want to leave the guys under his command."

The 25-year-old, who was engaged to be married and had a job waiting for him at an accounting firm where he had previously worked, had updated his Facebook page the day before the battle that took his life.

“Twenty days until I'm out of here,” he wrote. “A lot to look forward to once I get home. Can't wait.”