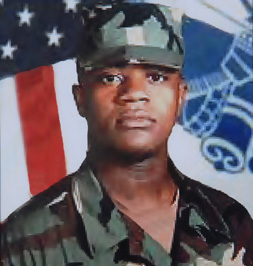 Private First Class Stephen K. Richardson was born in Jamaica and moved to Connecticut where he went to Bassick High School in Bridgeport and the University of Bridgeport before joining the Army in 2004. He was assigned to the 1st Battalion, 28th Infantry Regiment, 4th Infantry Brigade Combat Team, 1st Infantry Division out of Fort Riley, Kansas.

Richardson died when an improvised explosive device detonated near his vehicle in Baghdad, Iraq on March 20, 2007. He received the Purple Heart, a Bronze Star for meritorious service, and a Good Conduct Medal.

Richardson is survived by his wife, Katana and their unborn child; daughter Iyana; father, Cedric Hamilton; mother Jacqueline Hamilton-Carby, and other family.