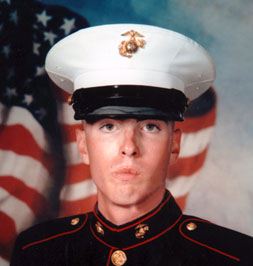 Fearless, intelligent and charismatic, Cpl. Bixler was an Eagle Scout and an exceptional athlete who loved to laugh with his friends.
A cross-country and track star in high school, he took up snowboarding and surfing when he joined the Marines in 2003 – sports that reflected his energetic personality.
In uniform, he was known as a quiet, courageous leader who was quick to volunteer for assignments. His battalion commander called him “exactly the type of Marine we were looking for.”
On the night of May 4, 2006, Bixler was on foot patrol in Al Anbar province – scanning for hidden explosive devices as his platoon followed behind. Spotting one of the homemade bombs, he warned his fellow Marines – allowing them to go around the device without harm.
But as he moved forward again to continue clearing the route, one of the buried bombs exploded beneath him.
Under his high school yearbook photo, Cpr. Bixler placed this quote from football legend Vince Lombardi.
''I believe a man's finest hour,” it reads, “is the moment he has worked his heart out and lies exhausted on the field of battle - victorious."