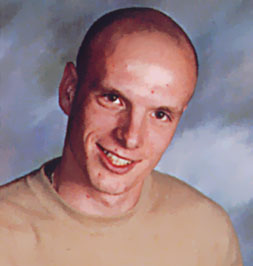 Army Specialist Robert Hoy, July 4, 1983 – December 11, 2004, was a member of the Army National Guard C Company, 102nd Infantry Battalion. He was killed when his armored vehicle hit a bomb in Baghdad while escorting a convoy of trucks carrying confiscated Iraqi ammunition. The blast ejected him from the vehicle and he was struck by a truck.

Hoyt was born in Manchester, Connecticut to Kathleen and Thomas D. Hoyt, Sr. He grew up in Mansfield, was a 2001 graduate of Edwin O. Smith High School and enlisted in the National Guard in 2002. He was predeceased by his grandmother, Etta Zwick and his grandfather, Ross Russell. Survivors include mother, Kathleen Hoyt of Storrs, father, Thomas Hoyt of Ashford; his brother, Thomas Hoyt, Jr.; two sisters, Ginger and Amber Hoyt; grandmothers, Clara Russell and Nancy Cunningham; grandfathers, Samuel Zwick and Paul Cunningham.