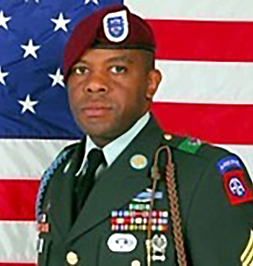 Sergeant Richard Ford, April 4, 1966 - February 20, 2007, born in Middletown, Connecticut, joined the Army National Guard in 1995 and entered active duty in 2004 where he was assigned to the White Falcons, 2nd Battalion, 325th Infantry Regiment, 2nd Brigade Combat Team, 82nd Airborne Division. He was on his third tour of duty in Iraq when he died by enemy fire.

Ford received the Bronze Star, the Purple Heart, and an Army Commendation Medal with a "V" for Valor in February 2005, for saving members of his crew under enemy fire in the city of Mosul.

He is survived by his son, Michael D. Patrick, his father Mason Ford, his two brother Matthew O’Connor and Mason Ford Jr., and sister Vanessa Migliore.