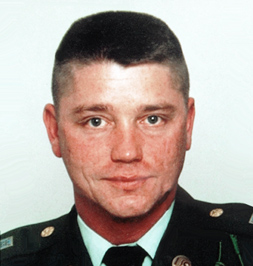 When a hijacked airliner crashed into his Pentagon office on Sept. 11, 2001, Staff. Sgt. Eaton only escaped death because he had recently vacated the space as it underwent renovations.

But less than two years later, the veteran Army officer would succumb to complications caused by extreme heat stress after being involved in a protracted firefight in Iraq.

Eaton had shocked his parents on his 18th birthday by announcing he was joining the military instead of enrolling in college. The Army offered the only assignment he wanted:  a counter-intelligence agent conducting top-secret missions to identify and neutralize terrorist threats.

In 2003, he voluntarily deployed to Iraq, where he was the leader of a tactical human-intelligence team assigned to assist armored cavalry in the Sunni Triangle. On Aug. 11, 2003, Eaton was engaged in a 24-hour firefight in 110-degree heat that left him suffering from extreme heat stress. After receiving treatment and being sent back to his barracks, he died in his sleep.

Eaton, whose family has a distinguished military history going back more than a century, is buried in New Haven near his 3rd great-grandfather, Civil War General Amos Beebe Eaton.

"He loved the military,”  said his father, Richard S. Eaton. “He loved this country and this was his life - in many respects, his identity."