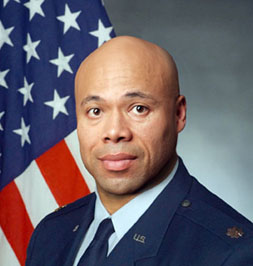 Major Estelle served 20 years with the Air Force and was devoted to his family, his community and his faith. He was known for his boundless enthusiasm, charisma and his support and mentoring of others, including in Bible studies that he led.

A cyberspace operations officer, Estelle was part of a NATO team that was training and advising the Afghan Air Force. He and seven other Airmen died April 27, 2011 at the Kabul International Airport of wounds suffered when an Afghan pilot opened fire on them during a meeting in an operations room.

Estelle, who was looking forward to soon retiring to Florida, had served multiple tours in Afghanistan and had returned there one day before his death after visiting his family for Easter. “He was a hero and he loved the military," his mother, Regina Estelle, said. "He loved what he was doing.”  Maj. Estelle was posthumously awarded the Bronze Star, Purple Heart, and Meritorious Service Medal.