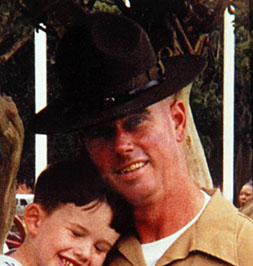 Staff Sgt. Jordan was so relentlessly upbeat he was often called Gump after the movie character
Forrest Gump.

“He was the nicest guy you could hope to meet. The nicest,” recalled his wife, Amanda.

A native of Texas, Jordan was a standout football player in high school, and was such a good bowler that he talked of trying to become a professional when he left the Marines.

He joined the Marines when he was 27, after a battle with Hodgkin’s disease, and previously served in Operation Desert Storm and in the conflicts in Kosovo and Afghanistan.

He was killed on March 23, 2003 along with eight other Marines in an ambush near the city of An Nasiriyah when Iraqi soldiers feigned surrender before opening fire.

“He loved the Marines,” Amanda Jordan said. “If he were here, he’d say he died doing what he was supposed to be doing.”