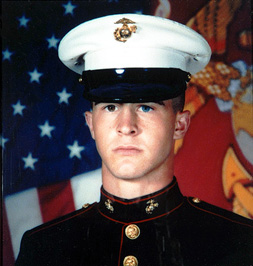 Lnc. Cpl. Johnson was only 11 years old when he joined a Young Marines detachment at Westover Air Reserve Base in nearby Massachusetts.

A role model and mentor to other Young Marines, he stayed in the detachment through his high school years, and enlisted in the Marine Corps. soon after graduating in 2005.

A year later, he was deployed to Iraq, where friends say the church-going young man with a great sense of humor was eager to go.

On Sept. 3, 2006, Johnson was on patrol in Al AnBar province, a battle-torn region in western Iraq, when he was killed by a roadside bomb that exploded near Ramadi. He had been in Iraq less than two months.

At his funeral in his hometown, some of his closest friends wore armbands made from an old pair of his fatigues from the Young Marines.

"He said Iraq is where he belonged and he knew where he was supposed to be," said Mark Durfee, an elder at Johnson's church and a retired Army lieutenant colonel. “I believe it was deep in his faith, in his being. He knew this was something that was important."