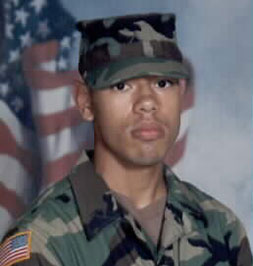 Private First Class Orlando Eric Gonzalez was born on June 27, 1985 in Bridgeport, Connecticut and lived there until he was 6 years old before going to live with his mother in Pennsylvania. Gonzales was killed on March 29, 2007 in Baqubah, Iraq, when an improvised explosive device detonated near his vehicle.

Directly after graduation from Susquehannock High School, Gonzalez enlisted in the Army to pursue a career and because he was passionate about serving his country. He was a member of the 5th Squadron, 73rd Cavalry Regiment, 3rd Brigade Combat Team, 82nd Airborne Division, Fort Bragg, North Carolina.

He is survived by his father, Orlando G. Gonzalez Jr. of Bridgeport, Connecticut; his mother, Carmen M. Diaz of York; his sister Jennifer M. (Stephen) Jackson; his brothers, Frank, Michael, and Nathaniel; three nieces, and many aunts, uncles and cousins.