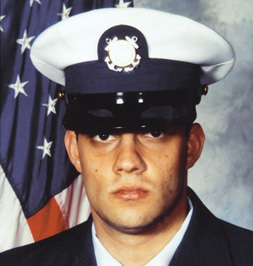 Petty Officer Bruckenthal could always be counted on to lighten the mood during a long mission with a joke or a funny story.
His rapport with his peers led him to be selected for an elite training assignment with the Coast Guard’s Tactical Law Enforcement Team, and he planned to follow his father in becoming a police officer after leaving the military.
"He was a public servant from when he was a little boy,” said his mother, Lauri Bullock. “He always wanted to be on the fire department. He wanted to be a policeman just like his Dad. His stepdad was an officer in the Army and he wanted to emulate them and grow up to be those kind of men – strong and brave and faithful and honorable."
Bruckenthal died April 24, 2004 from injuries sustained during an attack by suicide bombers in small boats loaded with explosives at an Iraqi oil terminal that he and his team from the USS Firebolt were defending.
He was the first Coast Guardsman killed in combat since the Vietnam War and was  posthumously awarded the Bronze Star Medal, the Purple Heart, and the Global War on Terrorism Expeditionary Medal.