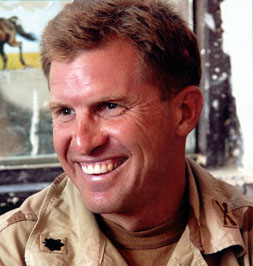 Michael J. McMahon, October 23 1963 - November 27 2004, was born in Fort Campbell, Kentucky, and raised in West Hartford. The son of retired Lt. Col. Dennis McMahon and Elizabeth McMahon, he graduated from Conard High School in 1981. After graduating from the United States Military Academy in 1985, he was commissioned in the aviation branch. He and his wife, Jeanette, also a lieutenant colonel, have three children.

McMahon led the 3rd Squadron, 4th U.S. Cavalry after having served in various capacities at home and in Europe and Korea. He commanded Task Force Saber in Afghanistan, responsible for provincial reconstruction teams supporting security and reconstruction efforts in the cities of Herat and Farah. He died when an aircraft transporting troops crashed into a mountain ridge in Afghanistan.