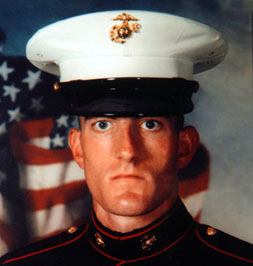 With his classic Marine stature and bearing, Lnc. Corp. Philippon was chosen while still in basic training for the Marine Corps Color Guard, for which he carried the Marine flag at ceremonies including President Ronald W. Reagan’s funeral in 2004.

But his real desire was for the action of the front lines.

“He'd been begging them for a while. Even though he enjoyed the color guard, he really wanted to be in Iraq,” said his father, Ray Philippon, a former Army officer.

The standout Conard High School hockey goalie and Marine rifleman died May 8, 2005 while fighting insurgents in western Iraq. The battle was part of a major offensive along the Syrian border designed to flush out followers of militant leader Abu Musab al-Zarqawi, who was killed in 2006.

Two days before his death, Philippon had written a letter to a class of students taught by his fiancé, Olivia Lawrence.

“There are a lot of dogs and lizards and flies and all sorts of creatures here,” he wrote. “The people for the most part are nice but most of the time just stay to themselves. The land is very flat and you can see for miles around. We enjoy what we do here and enjoy defending freedom and the people back home.”