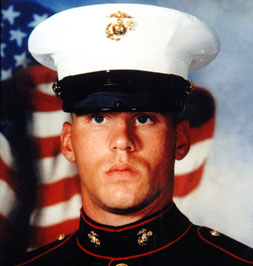 His obvious toughness and fierce fighting spirit earned Cpl Dempsey the nickname “Jack” - after the boxing legend with the same last name.

A fearless wrestler and football star at New Canaan High School, Dempsey was also known as a protector – of stray animals, of other youths against bullies, and of his fellow Marines when he was sent into battle. He had joined the Marines after calling a recruiter that he knew at about noon on Sept. 11, 2001.

"When he saw both buildings go down, he just couldn't take it," said his sister, Jennifer Dempsey.

On Nov. 13, 2004, Dempsey was leading a foot patrol in Al Anbar province when his unit discovered a homemade bomb buried along the road and attached to a cell phone that could be used as a remote detonator. Dempsey had ordered the other troops to clear away from the area when the bomb exploded, killing him and a fellow Marine. He was credited with saving the lives of seven Marines that day.

“I know that he wanted to make a difference," Jennifer Dempsey said.. "He was a sweet soul with the courage of a tiger."