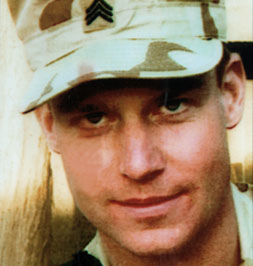 Sgt. Joseph Michael Nolan, March 10, 1977 – November 18, 2004, grew up in Waterbury and graduated from Wolcott High School. In 1999, Joe joined the long line of Nolans who answered the call when he enlisted in the United States Army. Nolan’s great-grandfather served in WWI, his grandfather had served in the Navy during WWII, and his father was a Marine in Vietnam.

Nolan was assigned to the 312th Intelligence Battalion of the 1st Cavalry Division. In early November 2004, he was sent to Fallujah to provide critical language and cryptologic support to coalition troops in the area. Nolan was killed when an explosive device struck his vehicle.