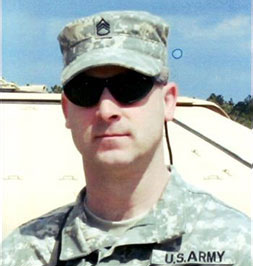 Staff Sergeant Joseph E. Phaneuf II, December 7, 1968- December 15, 2006, died when the armored vehicle he was driving struck a roadside bomb in Afghanistan. Phaneuf joined the Headquarters Company of the First Battalion 102nd Infantry Brigade in New Haven in November of 2005. He was also deployed to Iraq in February of 2004 with the Connecticut Guard’s 118th Medical Battalion.

Phaneuf was also a member of the Eastford Volunteer Fire Department and coached basketball, T-ball, and baseball.

He is survived by his wife, Michele Kozey Phaneuf and their three children Ryan, Danielle, and Jordan, his parents Peter and Barbara (Ortega), his sister Holly Grube, three brothers Rob, Dennis, and Tony, and their 13 children.