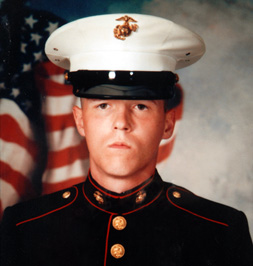 Lnc. Cpl Schmidt joined the Marines at age 19 when he decided he needed more focus in his life.

A computer whiz who loved playing ice hockey and snowboarding, Schmidt chose the Marines because of its reputation of having the most grueling and demanding boot camp training.

“The discipline, the structure, all the buddies - he really did enjoy it,” said his mother, Barbara Jiminez. “He really matured incredibly in boot camp.”

Schmidt was in Iraq for only two weeks when he and his platoon came under attack in an agricultural building near Fallujah on Jan. 30, 2005. A mortar shell pierced a tank of ammonia during the incident, and Schmidt suffered severe burns to his face and lungs.

His mother was by his side when he died nearly four months later at a military hospital in Texas.

“Johnny fought like a true Marine until the very end of his life,” she said. In his memory, Barbara Jiminez convinced state officials to hang a red, white and blue “Welcome Home Troops” banner in Bradley International Airport as a tribute to the many military men and women who arrive there after their tours overseas.