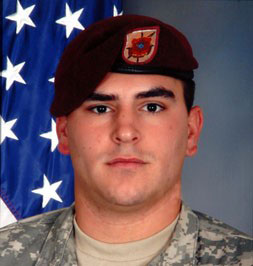 Army Sergeant Jason Lantieri, born in Waterbury, Connecticut on July 24, 1982, died in a town south of Baghdad, Iraq on October 9, 2007 of injuries suffered during late-night vehicle maneuvers. He graduated from Haddam-Killingworth High School and earned a bachelor's degree at Western New England College in Springfield before joining the Army in 2005. Lantieri was a member of the 725th Brigade Support Battalion, 4th Brigade Combat Team (Airborne), 25th Infantry Division out of Fort Richardson, Alaska. He was deployed to Iraq in 2006.

Lantieri leaves behind his parents, Jon and Kathy Miller of Clinton, and older brother David Miller.