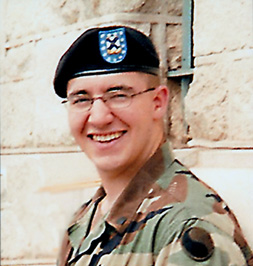 The first thing one notices about Sgt. DelGreco’s picture on the Wall of Honor is the power of his smile.

Although he is in uniform, he looks relaxed, happy, and definitely a little mischievous. And that is how his family and friends remember him – as an intelligent, committed soldier who affected everyone around him with his very obvious love for life.

Called “Fee” by his friends, he was known for doing all sorts of things that made life just a little more fun. Friends used to tease him about the Latin origin of his first name – which appropriately means happy, or lucky.

He was infamous for snitching spoons from restaurants after a meal, and to this day friends visiting his grave will leave a spoon for him before saying goodbye. Friends remember how he used to love to call radio shows with a fake name, and they still laugh at the picture of him dancing in the parking lot of the local pancake house.

Behind that ever-present smile, DelGreco definitely had a serious side. He was an Eagle Scout who enlisted in the National Guard when he was still attending Simsbury High School.

He was trained at West Point, volunteered to serve in Bosnia in 2001, and then to go to Iraq in 2004. That April, his unit was thrust into the battle zone of Baghdad.

On patrol just two days later, the Humvee he was riding in was hit by gunfire and a homemade bomb planted in the road.

Described by one fellow soldier as “The best gunner I ever had,” Sgt. DelGreco was the first Connecticut Army National Guardsman to die in the Iraq conflict.