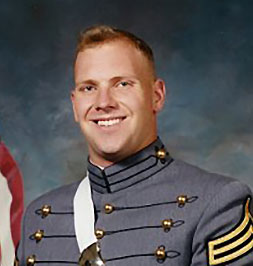 Army Captain Eric Thomas Paliwoda, 28, formerly of West Hartford and Farmington, was killed in action on Friday, January 2, 2004 in Balad, Iraq. Born February 23, 1975 in Hartford, Eric was the beloved son of Alfred and Mary Paliwoda of Sedona, Arizona. Surviving him are his parents, his sister and brother-in-law Allison and Captain Jeff Csoka of Clarksville, Tennessee, his fiancée Wendy Rosen of Hartsdale, NY, and his uncle, aunt, and cousins Thomas, Susan, Michael, and Cailin Luneburg of Danville, California. Growing up in Farmington, Paliwoda attended West District Elementary School and Irving A. Robbins Middle School. He graduated from West Hartford's Conard High School in 1993 and attended the United States Military Academy at West Point, New York.

He graduated from West Point in 1997 with a Bachelor of Science and was commissioned as a Second Lieutenant in the United States Army. Following graduation from the Academy, Eric traveled to Fort Hood, Texas where he served as both a Platoon Leader and an Executive Officer for an Engineering Battalion. He then moved to Fort Carson, Colorado where he was the Battalion Personnel Officer and Assistant Brigade Engineer for the 3rd Engineering Battalion. His extensive military education included graduation from the Engineer Officer Basic course, the Scout Platoon Leaders Course, the Armor Officer Advanced Course, the Combined Arms Services Staff School, and the Cavalry Leaders Course. Over the course of his career, Paliwoda was awarded both the Army Commendation Medal and the Army Achievement Medal twice, the National Defense Service Medal, and the Army Service Ribbon. He served as Company Commander for Bravo Company, 3rd Engineering Battalion, and 4th Infantry Division, Fort Carson, Colorado as part of Operation Iraqi Freedom. He had also recently been chosen to return to West Point as an instructor in the Department of Environmental Studies.