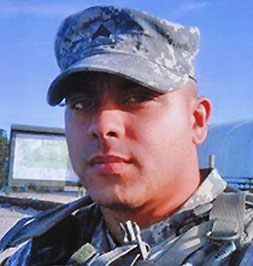 U.S. Army Staff Sergeant Edwin Rivera, 28, of Waterford, died at the U.S. Naval Medical Center in Maryland from wounds received on May 20, 2010 in a firefight in Afghanistan. Rivera served with the Connecticut National Guard Alpha Company 1st Battalion, 102nd Infantry Regiment out of Norwalk, Connecticut, which was part of the 86th Infantry Brigade Combat Team that trained Afghan security forces, police, and border patrol agents. It was his second deployment to Afghanistan.

Rivera graduated from the U.S. Army's Airborne and Mountain Warfare schools and the Warrior Leader's Course.

He is survived by his wife Yesenia and their two children and his parents Ceferino and Gladys Rivera.