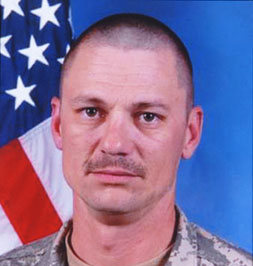 U.S. Army Sergeant First Class Edward Kramer, 39, who grew up in Southington, CT, was killed on June 29, 2009 in Baghdad, Iraq when an improvised explosive device detonated near his vehicle.

An expert marksman, Kramer was a member of the North Carolina National Guard Company A, 1st Battalion, 120th Infantry out of Whiteville, N.C. and a civilian firefighter.

He is survived by his wife Vicki and their daughters Megan and Erica; his parents Maryann White and her husband Charles and Donald Kramer Sr. and his wife Sandy; his brothers Donald Kramer and Burt Kramer, and sisters Misty Carroll Durkee and Kelly Kramer.