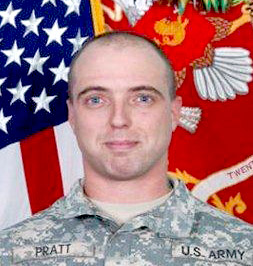 U.S. Army Specialist Dennis Pratt, January 7, 1975 – July 20, 2009, was killed in Afghanistan when several bombs exploded near his vehicle while he and three other soldiers were on a mission.  Pratt, 34, was raised in Southington, CT and a member of the 4th Battalion, 25th Field Artillery, 3rd Brigade Combat Team, 10th Mountain Division out of Fort Drum, N.Y.

Pratt was a third-generation soldier and is survived by his wife, Michelle Bryant and three children, Collin Kessler, Gabrielle Pratt, and Caden Bryant; his parent Jim and Sinammon Pratt; his brothers Jim Pratt and Kyle Hansan, and stepsister Leanna Pratt.