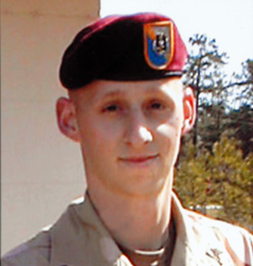 Sgt. Friedrich hadn’t planned on a military career when he enlisted in the Army Reserves to help pay for graduate school.
An intelligence officer with plans to join the CIA, Friedrich was working on a master's degree in forensic science at the University of New Haven when he was twice called into active duty – first after the attacks on Sept. 11, 2001 and again in January 2003.
Friedrich grew up in Hammond, N.Y. before moving to Connecticut when he was assigned to the 325th Military Intelligence Company in Waterbury.
His parents describe him as a natural leader with a great sense of humor who was co-captain of the cross country team at Brockport State College in New York, where he earned a degree in chemistry.
"Kids joined the cross country team because he made it fun,"  said his mother, Beth Friedrich. "He had that kind of personality. He was that kind of leader.”
Friedrich and another soldier were killed on Sept. 20, 2003 in a mortar attack on the Army base near the Abu Ghraib prison in Baghdad. Thirteen other soldiers were injured.
Friedrich’s parents spend much of their time traveling up and down the East Coast in a fishing trawler, where their son’s ashes are mounted in a walnut box attached to the hatch of the forward cabin.
“You are our moral compass,”  his father, David Friedrich, wrote in a memorial. “You are going with us as we travel…and we are seeing with our own eyes that this is still a country worth dying for.”