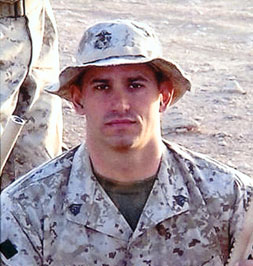 Travelers on Interstate 91 in Meriden might wonder why the plumbers and pipefitters school visible from the highway is named the Sgt. David Coullard Training Center.

In between deployments to active duty, Coullard in late 2004 had earned his journeyperson pipefitter credentials with the United Association Plumbers and Pipefitters Local 777 and planned to make his post-military career in heating and air conditioning. But on August 1, 2005, the Marine sniper from Glastonbury and his six-man team were killed in a terrorist ambush near Haditha. The incident happened just a few months after Coullard recovered from a gunshot wound and volunteered to return to duty.

“He was strong. He had to be strong to be a Marine. I just never realized how strong he was for others,’’ said his mother, Anita Dziedzic. “He had a caring heart that went beyond anything I ever imagined.’’

Raising her son as a single mother, Dziedzic took him to target shooting practice and even enrolled in a hunting course with him, leading to him becoming a skilled and passionate hunter. Coullard’s grave in Glastonbury is near where he used to hunt deer.