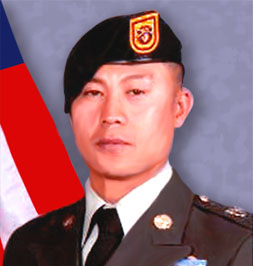 U. S. Army Sergeant First Class Dae Han Park, July 25 1975 – March 12, 2011, was killed in Afghanistan when his vehicle struck an IED. Park graduated from Watertown High School in Watertown and joined the Army in 1998 as an infantryman. He joined the Rangers in 2000 and volunteered for Special Forces training in 2005. He was assigned to the 3rd Battalion, 1st Special Forces Group (Airborne), Joint Base Lewis-McChord, Washington and was deployed on missions to countries including Iraq and India.

He is survived by his wife, Mi Kyong Park; his daughters Niya and Sadie; his parents Joseph and Bonnie Schneider of Thomaston, Conn.; and his sister and brother, Katie and Saejin of Watertown.