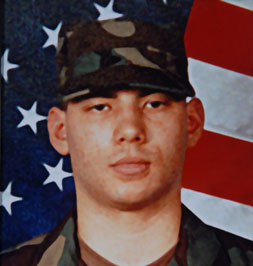 Staff Sergeant Christopher Hoskins, August 7, 1983 - June 21, 2005, was born in New London, Connecticut and graduated from Killingly High School, where he competed on the wrestling team. He died in Ramadi when his unit came under small-arms fire. Hoskins was an Army specialist assigned to the 1st Battalion, 9th Infantry Regiment, 2nd Brigade Combat Team, and the 2nd Infantry, based in Fort Carson, Colorado. He drove a Bradley fighting vehicle and was a gunner on a Humvee. Hoskins is survived by his father Richard Hoskins and his mother Claudia (Schiele) Hoskins, two sisters, Kristin Mayo and Erin Hoskins and one brother, Sean Hoskins, all of Danielson; his maternal grandparents, Louis and Irene Schiele of Kent, OH; his paternal grandparents, Bill and Alice Hoskins of Randolph, OH and one niece, Allyssa Mayo.