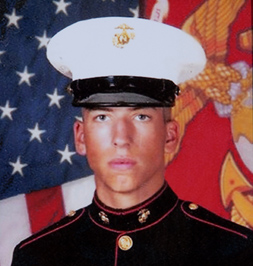 Full of life. Funny and fearless of heights. Loved to bungee jump, ride roller coasters and fly remote-controlled airplanes that he made himself. That is how friends and family remember Cpl. Cotner, who enlisted in the Marines in 2006 soon after  graduating from Wilby High School, where he joined the ROTC and volunteered to serve in honor guards.

A field radio operator, he was first assigned to a Marine Wing Support Squadron in Okinawa, Japan, where after a year he was promoted to Corporal. Deployed to Iraq in March 2008, he died about two months later in a non-hostile incident. "He was not only a soldier, but a brother, son and friend of all,” close friend A.J. Pelletier said. ”He stood up for what he believed in and had more courage than many of us.”

At a memorial service held at the family's church, many wore tropical shirts and leis as an acknowledgment of Cpl. Cotner’s free spirit.

"This is the party Christian would have wanted," his mother, Karen Cotner, said at the service.