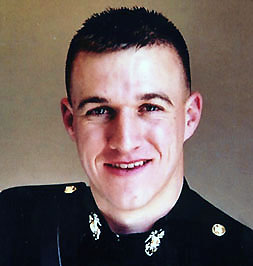 U. S. Marine Captain Brian Letendre, May 13, 1978 – May 3, 2006, died in Al Anbar Province, Iraq when a suicide vehicle exploded near him. He was assigned to the Marine Forces Reserve's Inspector and Instructor Staff, 1st Battalion, 25th Marine Regiment, 4th Marine Division out of Plainville, Connecticut.

He served tours in Okinawa, Japan, and Guantanamo Bay, Cuba. In 2003, he deployed to Iraq as an Infantry Platoon Commander participating in support of Operation Iraqi Freedom. He earned the Navy and Marine Corps Commendation Medal with a Combat “V” for Valor. During this second tour in Iraq, Letendre was tasked with training Iraqi soldiers.

Letendre, 27, is survived by his wife Autumn and their son Dillon.