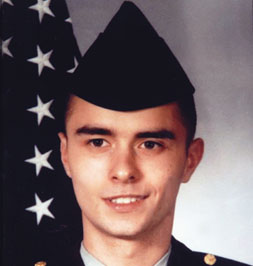 Army Sergeant Benjamin Gilman was born in Meriden, Connecticut May 21, 1975. He was assigned to 41st Engineer Battalion, 10th Mountain Division, Fort Drum, New York. Gilman was killed when a weapons cache he and six other soldiers were working to destroy exploded in Ghazni, Afghanistan. He was listed as duty status unknown until he was recovered on February 2, 2004. Gilman was a graduate of Orville H. Platt High School in Meriden, Connecticut and was active in the area's Big Brother/Big Sister program.

Gilman’s military service included Kuwait, Kosovo and Afghanistan and he was the recipient of the Bronze Star and the Purple Heart, posthumously, the Army Achievement Medal with Device, the Good Conduct Medal, the National Defense Service Medal, the Armed Forces Expeditionary Medal, the Kosovo Campaign Medal with Device, the Army Service Ribbon and the NATO Medal for Kosovo. He also held an Expert Badge with two Devices. Ben was an avid sports fan whose favorite teams were the New York Yankees, the Chicago Bulls and the Denver Broncos.