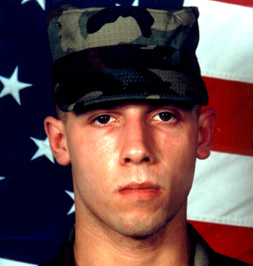 Although he was born on the Army base in Georgia where his father was stationed,  Pfc. D'Agostino didn’t think of joining the service himself until after the Sept. 11, 2001, terrorist attacks, when he was looking for an education, a career and a place to belong.
But once in uniform, the communications specialist set his sights on attending the U.S. Military Academy and making the service his career. In letters and e-mails from Iraq,  D'Agostino asked his family for Kool-Aid to flavor his water, pictures of his cousins, crossword puzzles and books to help him learn Spanish.

"He was always looking for ways to better himself," said his aunt, Beth Santos. "He wanted to make good use of his time over there."

D’Agostino took so much pride in being a soldier that he had decided to try to attend the U.S. Military Academy and make the service his career. When his mother remarried after his enlistment, he gave her away at the ceremony wearing his military uniform.

On Nov. 6, 2003, four days before his 21st birthday, D'Agostino was among a group of soldiers being flown out of Iraq to go on leave when their helicopter was shot down near Fallujah. He was among 16 soldiers who died in the crash.

"The memory he left with me was his laugh,'' his father, Steve D'Agostino, said at his funeral service.  "And what a great memory that is.''