The state will receive $54.2 million in federal disaster resilience funding to support both infrastructure projects in the city of Bridgeport and planning and research across both Fairfield and New Haven Counties. This funding is in addition to the $10 million previously received for Bridgeport planning and infrastructure awarded to the state through the Rebuild by Design competition.

About the Grant
Connecticut is one of thirteen grantees across the nation being provided funding through the U.S. Department of Housing and Urban Development’s (HUD) National Disaster Resilience Competition (NDRC) to advance resilience planning and implementation in the Sandy-affected region of the state. These resources will fund the following projects identified in the grant application (approximate dollar amounts presented at this stage):
Why was Connecticut selected as a winner in this competition?
Connecticut’s application represented a tremendous amount of work on the part of a dedicated team of state employees from the Office of Policy and Management (OPM), Department of Energy and Environmental Protection (DEEP), Department of Housing (DOH), Department of Transportation (DOT), Connecticut Insurance Department (CID), Department of Emergency Services and Public Protection (DESPP), Department of Public Health (DPH), and Department of Economic and Community Development (DECD); the Office of the Governor; and the Connecticut Institute for Resilience and Climate Adaptation (CIRCA), who came together as the State Agencies Fostering Resilience (SAFR) workgroup and took on this opportunity in addition to their daily responsibilities. The phase I application was prepared by a team led by CIRCA staff at the University of Connecticut in collaboration with the Yale Urban Ecology and Design Lab (UED Lab). The phase II application was led by OPM as the Chair of the SAFR Council formalized from the working group in Executive Order 50. The Council included the agencies of the SAFR workgroup, UConn, CIRCA, Yale UED Lab, and the Connecticut Conference of Municipalities. Additionally the Phase I and II applications were informed by partner organizations, including councils of government, environmental and housing non-profits, the CT Green Bank, state utilities and foundations, who pledged their expertise and leverage to the proposed pilot projects and coastal resilience plan. The phase II application was prepared with support from WSP Parsons Brinkerhoff.
In addition to the hard work that went into preparing the application, the core concept embodied therein was critical to Connecticut’s success. The resilience strategy proposed for Fairfield and New Haven Counties was one based on a collection of resilient nodes of transit-oriented development (TOD), organized around the region’s rail system, and linked by resilient corridors to the region’s coastal communities and critical infrastructure. Connecticut is investing heavily in its transit system, building new stations and increasing service. Low carbon and sustainable development around this system in the state’s city, town, and neighborhood centers will form the physical foundation for a resilient future. Taking advantage of the unique geological ridgelines running perpendicular to the coast, a series of resilient corridors will provide safe access to high ground and an organizational structure for new infrastructure and development. Together the principles of resilient TOD and resilient corridors will form the foundation of Connecticut’s resilience roadmap. 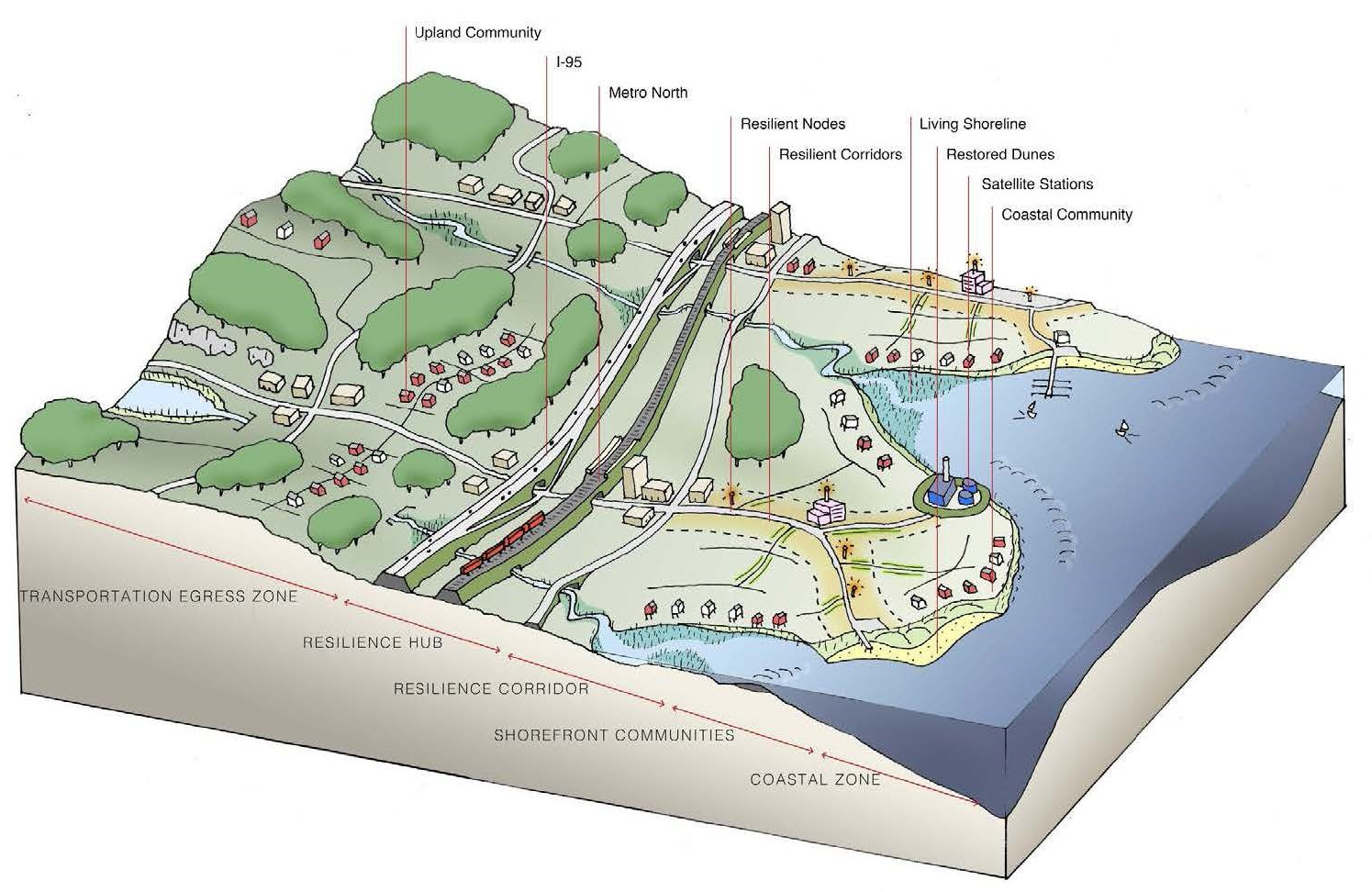 Organization Chart for the Department of Housing