State of Connecticut Department of Banking

In accordance with Governor Lamont's emergency declaration, employees and the public are asked to observe social distancing measures to ensure communal safety and to slow the spread of the novel coronavirus (COVID-19). People are asked to work from home and telecommute wherever possible. Adhering to these instructions, the Department of Banking has closed its offices to the public. However, agency staff will continue to provide services to consumers and industry through telework. When contacting the Department, please use electronic communication whenever possible. Agency staff will continue to check voicemails during this time. Consumers are encouraged to use our online form for complaints. If you are unsure where to send an inquiry, you may send it to Department.Banking@ct.gov and it will be routed appropriately. Thank you for your patience during this time.

In 1997, President Clinton signed the "50 State Quarters Program Act" which provided for the release of quarter dollars with designs emblematic of each of the 50 American states. Five coins will be issued every year by the United States Mint over a 10-year period in the sequence in which states became part of the United States. 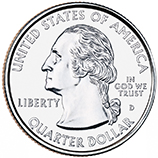 The Treasury and the respective states, in a collaborative process, will design the individual coins. The Mint, with Congressional authorization, has also redesigned the obverse of the coin to provide more room for individual state designs on the coins. As shown above, Connecticut's coin features a depiction of the Charter Oak, framed by the words "The Charter Oak" and a stone wall on the reverse side. The design was submitted by Andy Jones, of Hampton, as part of a special competition. 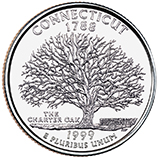 The Mint began releasing the coins in January 1999, starting with Delaware and continuing with Pennsylvania, New Jersey and Georgia. The official striking of the Connecticut quarter took place on October 7, 1999 at the Philadelphia Mint to complete the first set of 5 coins. (Connecticut was the 5th state to ratify the Constitution and join the Union).  Connecticut quarter dollars entered circulation during the Fall of 1999.

All 50 State Quarters™ are considered legal tender to be used in all commercial transactions. The Mint projects production of up to 750 million quarters for each state design. The coins will circulate normally via commerce as they are released. They will also be available from the U.S. Mint in collector sets.

Visit the United States Mint for more information on the 50 State Quarters™ program and other Quarter Dollar programs that depict various designs of the coin.