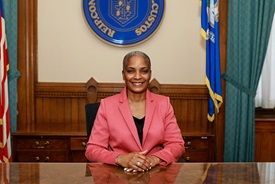 Secretary of the State
Stephanie Thomas

Stephanie Thomas has spent her entire career in public service. Prior to her election as Secretary of the State, she served as State Representative of Connecticut's 143rd District - Norwalk, Wilton, and Westport.  As Vice-Chair of the Government Administration and Elections Committee, Stephanie sponsored and helped pass a variety of voter-focused bills, such as automatic voter registration and resolutions to advance early voting and universal access to absentee ballots. Stephanie is committed to protecting voting rights and strengthening civic education in Connecticut.

Stephanie joined the public sector after a distinguished thirty-year career advising and problem-solving for nonprofit organizations. She has worked as a strategy and fundraising consultant since 1996 and opened her own fundraising consulting firm in 2013, raising more than $20 million annually for organizations working to help those left behind. Stephanie holds a B.A. from New York University and a M.S. in Nonprofit Management from New School University.

Throughout her career, Stephanie has served on many boards, strategic planning committees, and as an active volunteer in her community. She and her husband reside in Norwalk, Connecticut.