COVID-19 Community Levels Map Update, Jan. 27, 2023: The CDC has listed three Connecticut Counties—Litchfield, Middlesex and New Haven Counties—in the High/Orange category as part of its weekly COVID-19 Community Levels update. Fairfield, Hartford, New London, Tolland and Windham Counties are listed in the Medium/Yellow category.  Because all eight Connecticut counties are either in the High or Medium categories, the Connecticut Department of Public Health recommends that all residents consider wearing a mask in public indoor spaces. People who are at high risk for severe illness should consider additional measures to minimize their exposure to COVID-19 and other respiratory illnesses. Visit the CDC COVID-19 Community Levels Map for updates. 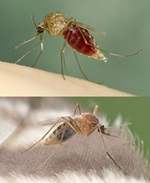 Mosquito-borne diseases are those spread by the bite of an infected mosquito. These diseases can be caused by viruses or a parasite. Viruses cause the majority of mosquito-borne diseases, and there are no medications to treat the symptoms caused by these viruses. Some mosquito species found in Connecticut are capable of spreading viruses that can cause disease in humans. Illness associated with these diseases ranges from mild to significant, and some can cause death. In Connecticut, surveillance is conducted to identify travel-related diseases (diseases acquired out of the state or out of the country) and diseases that can be spread by mosquitoes in the state. The Connecticut Department of Public Health conducts surveillance for the following mosquito-borne diseases:

The most effective way to avoid getting sick from mosquito-borne diseases is to prevent mosquito bites.

The Connecticut Agricultural Experiment Station conducts mosquito trapping across the state during June through October. Mosquitoes are tested for viruses that can cause human disease, including those found in Connecticut such as Eastern Equine Encephalitis virus, Jamestown Canyon virus, and West Nile virus

Identification Guide to the Mosquitoes of Connecticut