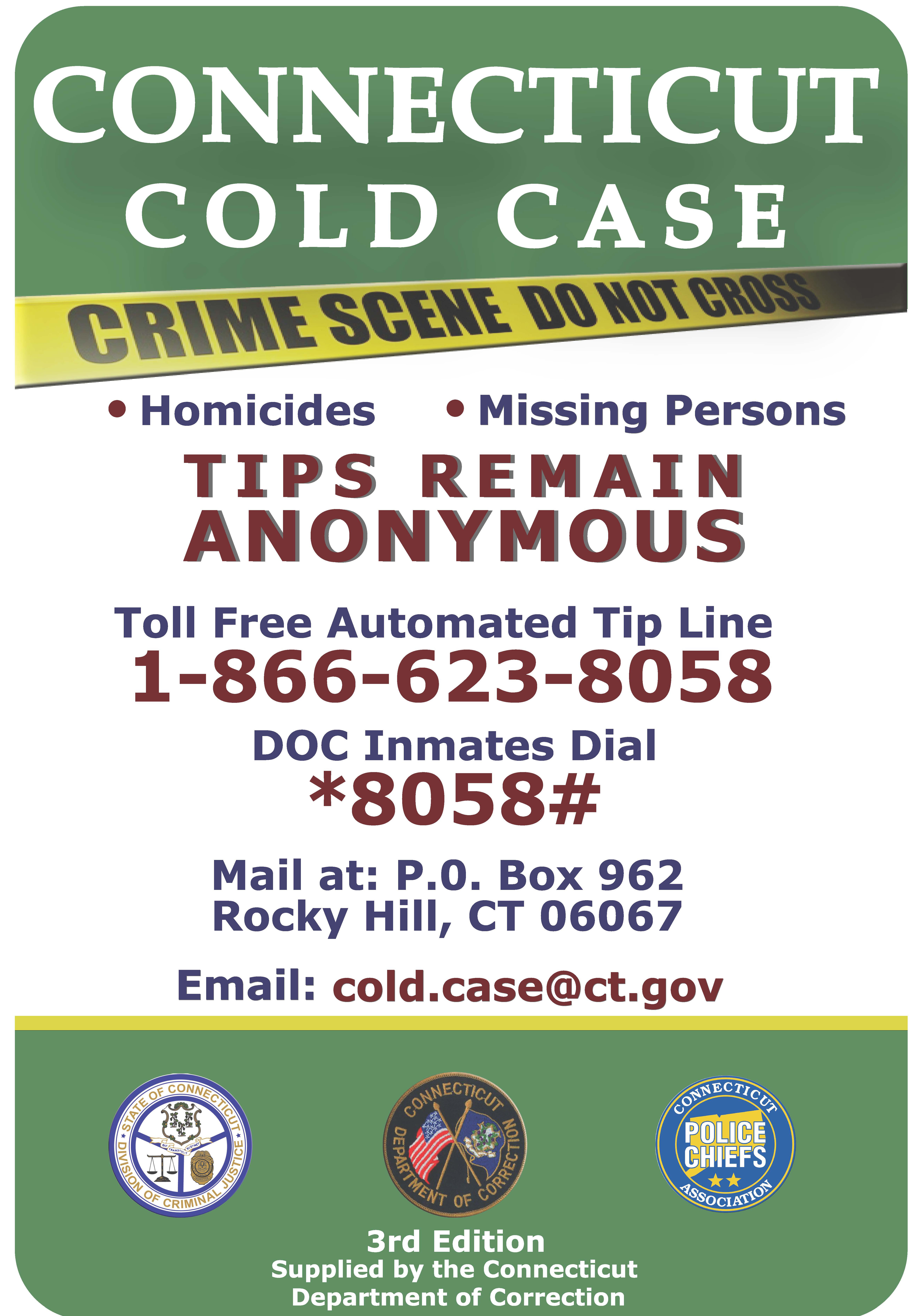 he playing cards were produced by the Cold Case Unit in the Office of the Chief State’s Attorney in conjunction with the Department of Correction and other law enforcement agencies working to solve cases that have gone “cold,” or unsolved for a prolonged period of time.

Each card in the deck of 52 features a photograph and brief details about a homicide or missing person case and lists telephone, mail and e-mail contacts inmates can use to supply information. The cases featured on the cards are changed in subsequent decks to allow for the maximum number of cases to be circulated through the correctional system.

“Cold case playing cards are a valuable tool assisting investigators working to solve these difficult cases and achieve justice for the victims of these crimes and their families,” said Chief State’s Attorney Kevin T. Kane. “I applaud and thank the Department of Correction for its continued support of this successful initiative and its continued active involvement in cold case investigations.”

“It is all about the victims and their families,” said Interim Correction Commissioner Scott Semple.  “The faces on these cards are someone's mother, father, sister, brother, wife, husband, or child. Any tip, or lead, might be the missing piece to solving a case and bringing resolution to a victim's loved ones.”

“The success of the Cold Case Cards underscores the importance of cooperation among all facets of the law enforcement community,” Semple added. “The Department of Correction is proud to assist in whatever way possible in helping to bring justice to the victims of crime.”

To date, investigators have received more than 470 tips generated by the cards. Since the first two decks were distributed, arrests have been made in nine homicide cases featured on the cards.

The cold case playing cards are the only playing cards available for purchase by inmates in the facilities operated by the Department of Correction. Revenue from sales is used to produce subsequent decks, making the project self-sufficient and operating at no cost to taxpayers.

All three editions of cold case playing cards can be seen on the website of the Department of Correction, or the Division of Criminal Justice.

Members of the public are also encouraged to view the cards and to share any information they might have about any of the cases. Information may be submitted by telephone toll-free at 1-866-623-8058, by email at cold.case@ct.gov or by regular mail at P.O. Box 962, Rocky Hill, CT 06067.

“The Division of Criminal Justice is greatly indebted to the state agencies and the municipal police departments that have contributed personnel and other resources to the cold case units. We also wish to recognize and thank the many individual law enforcement officers who have given so much of their time and expertise to what is truly a collaborative endeavor,” Chief State’s Attorney Kane said.

In addition to cold case investigations undertaken by individual municipal police departments and the Connecticut State Police, the Division of Criminal Justice oversees the Cold Case Unit in the Office of the Chief State’s Attorney and the Southeastern Connecticut/New London County Cold Case Unit.