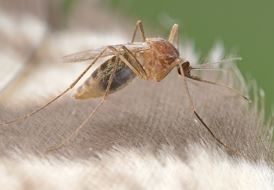 Eastern Equine encephalitis virus (EEEV) is spread to people through the bite of infected mosquitoes. EEEV is rare in the United States with an average of 7 cases reported each year. The virus is found in mosquitoes in Connecticut. There is no vaccine to prevent or medicine to treat EEEV infection. Approximately one third of people who become sick from EEEV will die from the illness. Early recognition and prompt supportive treatment can lower the risk of complications and death. The best way to prevent getting sick from EEEV is to prevent mosquito bites.

Where in the United States, Has EEEV Been Found?

In 2000, encephalitis was added to the state-wide reportable disease list, which included Eastern Equine encephalitis (EEE). During 2003-2018, there was one case of EEE reported to the Connecticut Department of Public Health. Mosquitoes that can spread EEE are found in Connecticut.

Cases of Eastern Equine encephalitis virus reported to the DPH from January 1 – December 31, 2019.

The Connecticut Agricultural Experiment Station conducts mosquito trapping and tests for viruses including EEEV during June to October each year.

Identification Guide to the Mosquitoes of Connecticut