Vibrio bacteria are found in warm salt or brackish water (mix of salt and fresh water) of estuarine or marine environments. There are about a dozen species (spp.) of Vibrio bacteria that may cause illness in humans, known collectively as vibriosis. People can become infected with Vibrio spp. by consuming raw or undercooked seafood, most commonly oysters, or when an open wound is exposed to raw or undercooked seafood juices or warm salt or brackish water (1,2). According to the Centers for Disease Control and Prevention (CDC), an estimated 80,000 illnesses, 500 hospitalizations, and 100 deaths occur annually in the United States due to Vibrio infections (3). Vibrio vulnificus can cause necrotizing soft tissue infection or septicemia. In Connecticut, vibriosis is seasonal, with illnesses most commonly occurring during June – October when water temperatures are warmest. Vibrio spp. wound infections follow a similar seasonal pattern; however, most cases occur during July – September (Figure 1).

The Connecticut Department of Public Health (CT DPH) has conducted statewide surveillance for V. vulnificus since 1999 when V. vulnificus infections were added to the list of reportable diseases and laboratory reportable findings (4). In 2006, all clinical Vibrio spp. isolates, including V. vulnificus, were required to be sent to the State Public Health Laboratory (SPHL) for confirmatory testing and subtyping (5). All Vibrio reports are followed-up with an interview of the patient by staff of the CT DPH using the national Cholera and Other Vibriosis Illness Surveillance form to collect demographic, clinical, and exposure information, including seafood consumption and environmental exposures.

During August of 2020, 5 V. vulnificus infections were reported to the CT DPH. One case reported illness onset during July and 4 reported illness onsets during August. Cases were residents of Fairfield (1), Middlesex (1), and New Haven (3) counties and were 49 – 85 years of age (median 73); 4 (80%) were male. All cases were hospitalized with 2 having septicemia (infection of the bloodstream) and 3 having wound infections; no deaths were reported.  All cases reported exposure to salt or brackish water during activities such as swimming, crabbing, and boating prior to onset and had pre-existing wounds or sustained new wounds during these activities. Whole genome sequencing (WHS) was conducted at the SPHL for 4 clinical V. vulnificus isolates, and high-quality single nucleotide polymorphism (hqSNP) analysis was conducted at CDC. The hqSNP analysis found the 4 isolates differed by greater than 1,900 SNPs.

Infection with V. vulnificus can result in serious illness often requiring hospitalization, intensive care, and limb amputation, and can lead to bloodstream infection causing septicemia. According to CDC’s national surveillance data, 1 in 5 people with V. vulnificus infection die, sometimes within a day or two of becoming ill (1). People at greatest risk for illness are those with weakened immune systems and the elderly (1).

During July – August 2020, 5 V. vulnificus infections were reported to the CT DPH, which was highly unusual as only 7 infections were reported in total during the previous 10 years. There were demographic differences among the 5 cases reported during 2020 when compared to the 7 cases reported during 2010-2019; 80% of the 2020 cases were male and the ages were more tightly clustered ranging between 49-85 years old. During 2020, all 5 V. vulnificus cases were hospitalized, compared to 71% of the cases during 2010-2019. In response to the unusual increase in V. vulnificus cases reported during the summer of 2020, the CT DPH issued a press release on September 12, 2020 to warn residents in shoreline areas about the potential dangers of exposure to salt or brackish water along Long Island Sound.

The risk of acquiring V. vulnificus wound infections can be minimized. Prevention measures include staying out of saltwater or brackish water when wounds are present, including wounds from recent surgeries, piercings, or tattoos. If avoidance of salt or brackish water is not possible, wounds should be covered with a waterproof bandage to help prevent potential exposure. Exposure can occur at beaches during activities such as swimming, wading, fishing, or walking on the shoreline. Also, protective gloves can be worn to prevent wounds while crabbing, fishing, or handling shellfish. If a wound is sustained while in direct contact with saltwater or brackish water, it is important to wash the wound thoroughly with soap and water.

The CDC recommends the following for management of V. vulnificus wound infections: 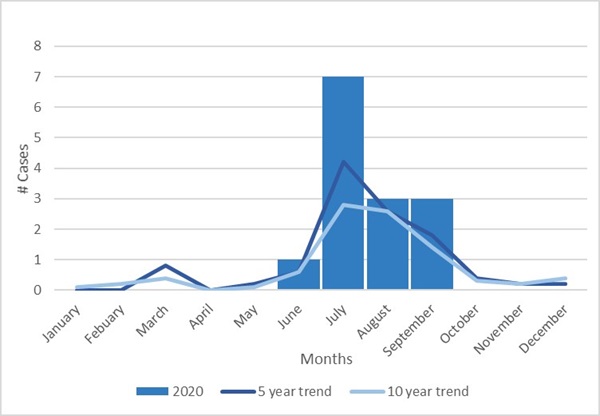 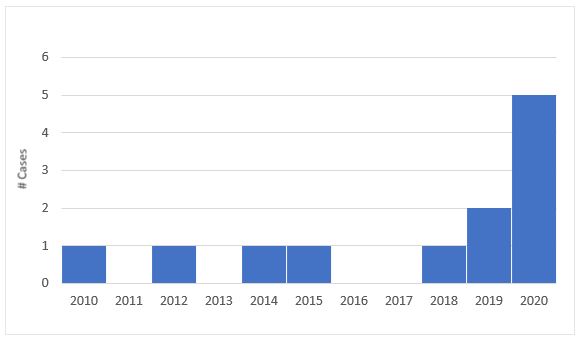