How Many Snake Species Are Native to Connecticut?
The answer is 14! Only 2 of the 14 native snake species are venomous -- the northern copperhead and timber rattlesnake.

Snakes Are Fascinating!
They survive in some of the most extreme environments on Earth and occur in a variety of habitats everywhere around the world, with the exception of Iceland, Greenland, Newfoundland, Ireland, New Zealand, the Falkland Islands, Antarctica, and some smaller islands. Some snakes spend most of their time underground, some live in the tree tops and have the ability to glide through the air, and others spend their entire lives swimming in the open ocean.

Snakes Are Reptiles
They are long and slender, covered with scales, and have no limbs. The scales can come in various shapes and can either be keeled (with a raised ridge down the center) or smooth (without the ridge). The wide scales on a snake’s belly are called ventral scales. 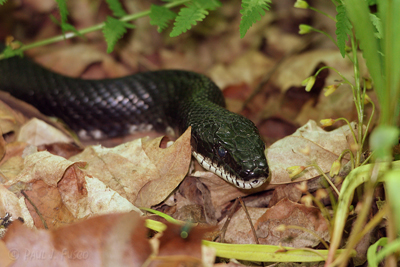 The eastern ratsnake (previously known as the black ratsnake) is Connecticut's longest snake. Adults can range in size between 46 and 68 inches.

Snakes Are Ectothermic (cold-blooded)
Their body temperature changes with the temperature around them. A snake will bask in the sun to warm up or it will take refuge in a cool, shady spot when the weather is hot. In colder environments, snakes will brumate during winter. Unlike hibernation when animals are asleep, brumating animals are awake but inactive.

Snakes Cannot Blink their Eyes
The eyes are covered with a clear protective membrane called a spectacle.

Snakes Are Carnivores
They eat other animals, such as mice, birds, fish, frogs, insects, and even other snakes. 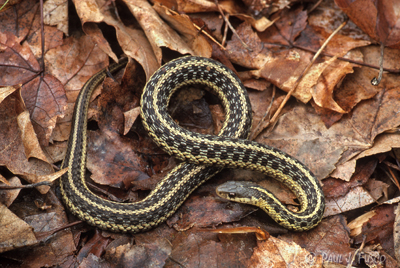 The eastern gartersnake is Connecticut's most widespread snake. It is found everywhere, from moist areas to forest edges to vacant lots and backyards.

Moving Like a Snake
Despite a lack of limbs, snakes have developed a variety of ways to move and get around. Snakes have a flexible spine made up of 200-400 vertebrae, each of which is attached to a pair of separate, thin ribs. Most snakes move in a series of S-shaped curves, pushing themselves along using plants, rocks, sticks, and other surfaces as shove-off points. A few desert snakes move using a complicated series of sideways body twists (known as sidewinders). Some snakes are also very adept at swimming in water.

Snake Senses
Snakes have a variety of ways to sense their environment. They can see, but use their tongues to “smell” and find food. The Jacobson’s organ, located in the roof of the mouth, enables snakes to identify prey as well as other snakes and animals that may want to prey on them. Snakes do not have external ears, but they can detect vibrations to help locate prey.

Pit vipers, a type of snake, use special nerve endings in their skin to detect the body heat of prey animals. The only pit vipers found in Connecticut are the northern copperhead and timber rattlesnake. These snakes have a cavity on each side of the head located between the nostril and the eye that contain a pit organ. The organs alert the snakes to the presence of nearby prey animals. 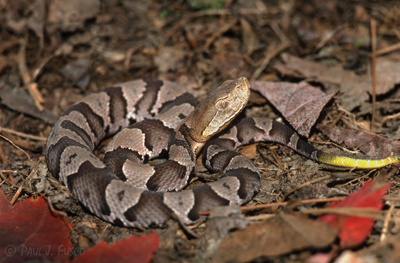 The northern copperhead is one of two venomous snake species found in Connecticut -- the other is the state endangered timber rattlesnake. This juvenile copperhead has similar markings as an adult, but exhibits a distinguishing yellowish tail tip.

Meat-eating Strategies
Different kinds of snakes attack prey in different ways. Some snakes constrict their prey until it suffocates. Some eat their prey alive. Venomous snakes inject their prey with venom through fangs.

Snakes have special jaws that help them swallow their food whole. Swallowing prey can take hours, so snakes have windpipes that can move forward over the tongue. This allows the animals to continue breathing while eating.

Snakes have strong digestive juices, called enzymes, that dissolve prey, including fur, feathers, and bones. They do not have to eat as often as other animals because they are ectothermic and tend to eat large meals.

Shedding the Skin
Snakes grow throughout their entire lives. This growth process requires snakes to continuously replace, or shed, their outer layer of skin, also known as ecdysis. A snake undergoing ecdysis will have a gray or bluish look to the eyes due to fluid underneath the spectacle. At this time, the snake has poor vision. Once the skin is ready to shed, a snake will rub its head against a rough surface to begin the shedding process. The snake essentially crawls out of its skin, usually leaving it in one piece and inside-out. The shed skin stretches out during the shedding process, so it is not an accurate indicator of a snake’s true size.

Reproduction
Some snakes lay eggs and some give birth to live young. The newly-hatched snakes are on their own and must find their own food.

Over-collection
Some snake species are so fascinating and unique that they are heavily exploited for the pet and skin trade. Snakes are often not managed appropriately for sustainable use, unlike most game birds, mammals, and fish. Unregulated use and collection of wild snake species can result in undetected declines.

Human Persecution
Human persecution of snakes is rampant (even in Connecticut), particularly against venomous snakes. Many snakes are killed, regardless of whether or not they are venomous, because people tend to have an irrational fear of these creatures. The extent of human persecution of snakes is demonstrated in a study conducted in Kansas, where eight out of 10 drivers were found to intentionally hit snake-like objects placed on the road. It is critical to educate people on the value of snakes, how to identify venomous and non-venomous species, how to avoid being bitten and, to leave snakes alone. 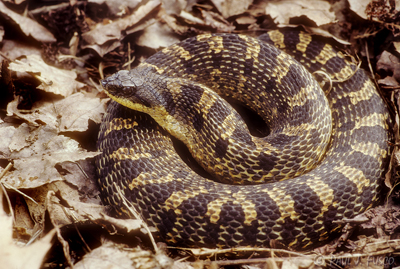 The eastern hog-nosed snake is often confused with the venomous northern copperhead and timber rattlesnake. It is a species of special concern in Connecticut. When threatened, the hog-nosed snake may hiss, flatten its body, spread its neck hood, and/or roll over on its back and play dead.

Global Climate Change
Because snakes are ectotherms (obtaining most of their body heat from the environment), they are great indicators of climate change and how it will affect other species. Studies indicate that snakes will be negatively affected by climate change because they cannot evolve or migrate fast enough to keep up with the changes in suitable habitat.

More Research and Funding Needed
In order to conserve snake species, we need to learn more about these often secretive animals. Currently, in comparison to research on other vertebrates, very few organizations or institutions conduct research on snake species. In addition, snakes are one of the most difficult groups of animals to study, and new techniques are needed that will allow biologists to effectively study or monitor snakes.

To make matters more difficult, finding funding for research efforts is extremely challenging. The conservation of snakes is seriously overlooked and underfunded.

Snakes Should NEVER Be Killed!
Hundreds of snakes are needlessly killed by people each year because of mistaken identity, fear, and misunderstanding. Very often, when a snake is found near a home, people panic and may even assume that the snake is dangerous or venomous. Few Connecticut residents realize that they are unlikely to encounter a venomous snake around their home. The two venomous snake species found in Connecticut (timber rattlesnake and copperhead) do not have wide distributions. These venomous snakes, along with the other 12 Connecticut snake species, are NOT aggressive and will only bite if threatened or handled. If left alone, snakes pose no threat to people. If you encounter a snake in your yard or while out on a walk in the woods, observe and enjoy it from a distance and allow it to go on its way.

Other important ways you can help snakes include: 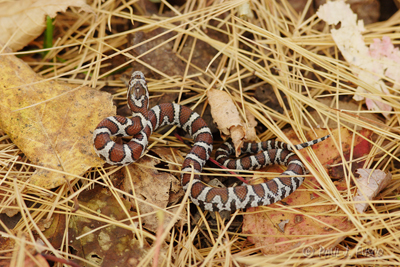 The eastern milksnake is widespread in Connecticut and does well in human altered landscapes, especially when there is a mix of fields, woods, pastures, and habitation. Many milksnakes are killed every year as they are often confused with the venomous copperhead. Neither of these snakes should be killed. If left alone, snakes pose no threat to people.

Want to Learn More About Snakes?

Snakes in Connecticut - A Guide to Snake Identification
This snake identification guide was published by the DEEP Wildlife Division to help people identify snakes, thereby minimizing unwarranted concern when a snake is encountered