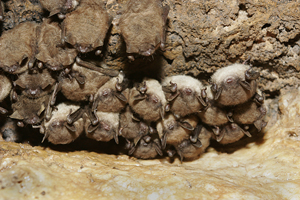 Whether you have seen a bat out during winter; one or more roosting in your bat house, barn, or eaves during summer; or even a dead bat, the Wildlife Division wants to hear about it. Use the Public Bat Sightings Form (Word Form / PDF) to report your observations. A digital photograph or cellphone photo of the bat(s) is extremely helpful. Photos may be sent with the Bat Sighting Form or emailed to deep.batprogram@ct.gov.

If you find a dead bat(s), please do not discard it. The Wildlife Division may be interested in the carcass. Save the carcass by double bagging it (WEAR GLOVES!) and placing it on ice or in a freezer. Contact the Bat Program at the Wildlife Division’s Sessions Woods Office for additional information (860-424-3011; deep.batprogram@ct.gov). NEVER touch a live bat. Bats will bite to protect themselves!

Information gathered through the Public Bat Sighting Forms will help us understand how bats are doing in the wake of white-nose syndrome (WNS), a deadly disease that has killed several million bats since it was documented in New York in the winter of 2006-2007. It is named for the white fungus (Pseudogymnoascus destructans) that is seen on a bat’s nose and/or wings while in hibernation. WNS has continued to spread rapidly. See an animation over time of the spread of WNS. Learn more on the white-nose syndrome web page.

If you would like to be contacted by the Wildlife Division after you submit your Public Bat Sighting Form, please make note of it on the form. Thank you for taking the time to help Connecticut’s bats! 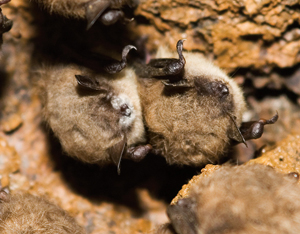 Where Do Bats Go During Winter?

For all bats in Connecticut, winter brings about a change to colder temperatures and a lack of insects for food. As a result, bats must leave their summer habitat and move to where they spend the winter. While there is not one simple answer to where bats go, there are some general trends on where different groups of bats end up each winter. The nine species of bats in Connecticut are often categorized into one of two general groups; cave bats or tree-roosting bats. 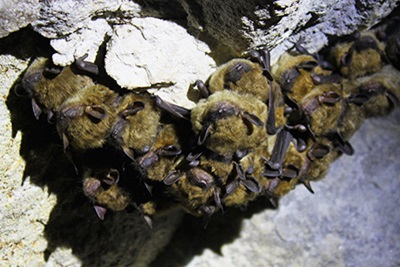 Much more is known about cave bats because they tend to live more social and communal lives throughout the year. Cave bats include the big brown bat, which is the species most likely to roost around your home or in your barn in warmer months. Come winter, big browns and the other cave bats, like tri-colored, northern long-eared, eastern small-footed, little brown, and Indiana bats, migrate regionally to cavernous spaces, usually below ground, where they hibernate through the coldest months of the year. Bats select slightly different types of cave-like structures for hibernation, as long as the environmental conditions suit their needs. Most often, they are found hibernating in abandoned mines, caves, and other underground structures, where temperatures hold steady between 32°F and 49°F. During hibernation, the body temperature of a bat can decline from a normal summer range of 99°-106°F down to as low as 32°F. This drop in body temperature helps slow down a bat’s metabolism, reducing its need to eat for several months.

Another important characteristic of suitable hibernating spaces is humidity. Hibernating bats are susceptible to dehydration, so choosing a hibernaculum with higher humidity will reduce evaporative water loss. In some cases, high humidity can cause water droplets to form on the fur of hibernating bats, which bats can drink when they periodically wake up. Waking and warming up from hibernation is energetically expensive. In fact, a bat can use 80-90% of its entire stored fat reserves just from waking up for a few minutes each winter. The high energy cost of warming up after waking is part of what makes cave bats so vulnerable to white-nose syndrome (WNS). The disease is caused by an introduced fungus (Pseudogymnoascus destructans, or Pd) which thrives in the same cold, wet places where cave bats hibernate.

Since the discovery of white-nose syndrome (WNS) in North America in 2006, nearly seven million cave bats have perished. The fungus infects a hibernating bat’s muzzle and wings, irritating the bat and causing it to wake up frequently and burn through stored fat reserves too soon. Starving bats are forced to leave their hibernacula in search of food, which leads to death in cold winter months. Deaths from WNS for some species, like the little brown and northern long-eared bats, have resulted in over 90% population declines in the region. 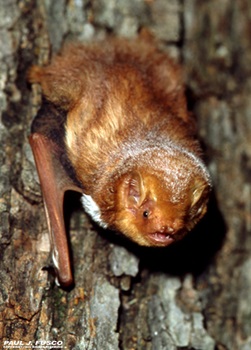 Connecticut’s three tree-roosting bat species include the eastern red, silver-haired, and hoary bats. These species are mostly solitary throughout the year, and do not hibernate in cave-like environments, making them much more difficult to study. Tree-roosting bats generally migrate long distances to more southern latitudes during winter. Upon arrival to their winter range, many tree bats will still hibernate during periods of cold weather, emerging to feed during periods of warm winter weather.

While bat populations face a long, uphill battle to recover, there are some things you can do to help:

Listen to a report by WNPR Connecticut Public Radio about the Wildlife Division's ongoing efforts to monitor Old New-Gate Prison and Copper Mine in East Granby, a well-known hibernaculum for several of Connecticut's bat species.