150th Anniversary of the Connecticut Bureau of Natural Resources

The Department of Energy and Environmental Protection’s Bureau of Natural Resources celebrated its 150th Anniversary in 2016.The Divisions of Wildlife, Inland Fisheries, Marine Fisheries, Forestry, and the Environmental Conservation (EnCon) Police all joined in the celebration, as well as many partners. Throughout 2016, we looked back at our history and also looked forward to the future of natural resources in our state. The all six issues of Connecticut Wildlife Magazine in 2016 focused on the 150th Anniversary celebration with many articles highlighting the history of the Bureau of Natural Resources.

View our historical timeline: Connecticut Bureau of Natural Resources Through the Years

View our Then and Now webpage: Select a topic and learn how the Bureau of Natural Resources and wildlife in Connecticut have changed through time.

Back in 1866, the Connecticut State Legislature took action and created the Fisheries Commission, starting us out on the path that led us to the science-based Bureau of Natural Resources of today. Over time, the original "commission" evolved and grew to encompass the Divisions of Wildlife, Inland Fisheries, Marine Fisheries, Forestry, and Environmental Conservation (EnCon) Police. The EnCon Police Division moved to the DEEP Bureau of Outdoor Recreation in 1996, but is part of the 150th celebration because its origin can be traced back to the original Board of Fisheries and Game.

From the coastline of Long Island Sound, to the Litchfield Hills, the Connecticut River Valley, and the Eastern Highlands, the DEEP Bureau of Natural Resources, with the assistance of committed sportsmen and women, supportive legislators, and concerned citizens, has worked to protect and conserve the natural resources and scenic beauty that make Connecticut a special place to live, work, and visit.

We are deeply indebted to William Myers, retired Conservation Officer, for the hundreds of hours invested by him to obtain, restore, and provide many of the historical photos (and their history) included in the 150th celebration materials.

Learn more about the divisions that celebrated 150 Years of Natural Resource Conservation in Connecticut in 2016:

Learn more about the history of the Bureau of Natural Resources

View the 125th anniversary issue of SCOPE published in 1991. SCOPE was the precursor to the current Connecticut Wildlife magazine.

In 1914, the last surviving passenger pigeon, named Martha, died at the Cincinnati Zoo putting an end to decades of greedy market hunting. View the article from Connecticut Wildlife magazine for more information on this incredible story.

This milestone year also is an important time to look to the future. Adequate funding to perform various natural resource missions is critical. Will Connecticut's fish, wildlife, forests, and other natural resources survive for another 150 years? The answer is up to all of us. 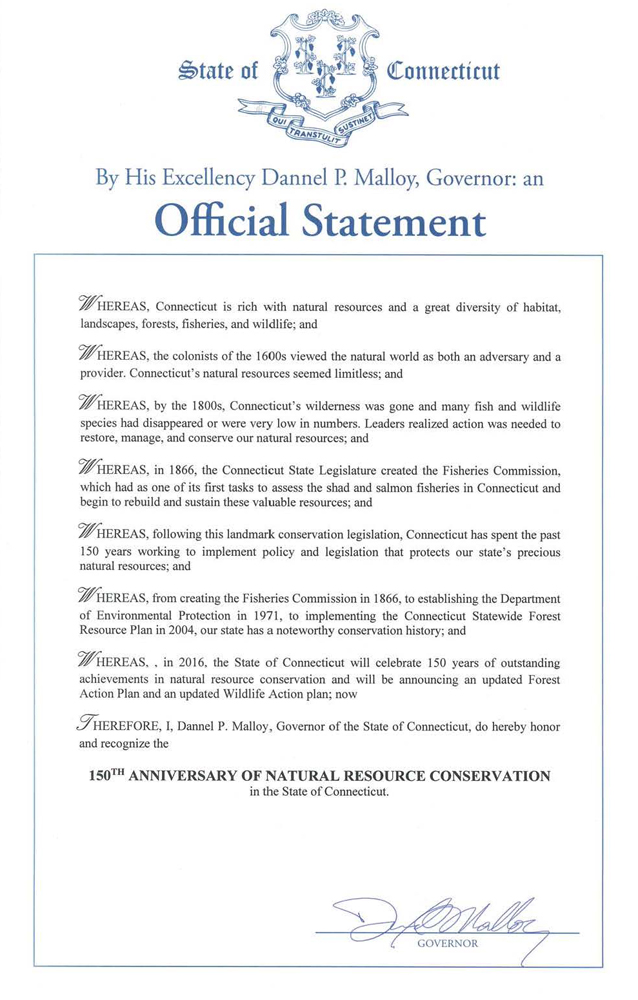