Could that title, “Common Carp Management and Fishing” be correct? Just a few decades ago, the thought of managing carp as a trophy fishery would have been almost laughable (in some parts of the country it still is). Fast forward to present day and the common carp is generating a multi-billion dollar recreational fishing industry in their native range of Europe, while sport fishing for carp is gaining popularity in the USA and specifically in Connecticut. This growing appreciation is for good reason, as these members of the minnow family (Cyprinidae) can grow to well over 40 pounds and offer anglers the fight of their life!

In Connecticut, common carp (Cyprinius carpio) inhabit a large number of lakes and ponds, as well as larger river systems like the Connecticut, Housatonic, and Thames. Many people still consider carp a nuisance species or “trash” fish, mostly because the fish can often survive in waters of marginal quality, and the assumption is made that the deteriorated water quality has been caused by the carp. While carp can cause localized turbidity issues because of their feeding behavior of digging through bottom sediments in search of food, these conditions are temporary and in no way the root cause of water quality issues seen in Connecticut. However, if carp numbers become too great in any given area (river or lake), the reduced water clarity can become a more lasting problem.

Being a minnow, common carp do not have teeth in their mouth, but do have well-developed teeth located on the pharyngeal bone behind the gill chamber to grind food. When most people think of a “minnow”, they think of the shiny little fish in a bait bucket, or the fish you would capture as a kid in a small stream. However, Cyprinius carpio is the largest strictly fresh water fish in Connecticut waters!  This fish has the ability to grow in excess of 40 pounds with the current state record being a 43 pound 12 ounce fish caught by Mike Hudak from the Connecticut River in 2012; not bad for a fish that feeds primarily on aquatic vegetation, insects, small crustaceans, and occasionally small fish.

It is important to note that the common carp is different from the various "Asian carps" infamous for being super invasive in the Midwest. Common carp are not considered to be an invasive species in Connecticut.

Technically, we only have two carp species in Connecticut - common carp and grass carp (Ctenopharyngodon idella). Goldfish (Carassius auratus), as seen in many pet stores, are minnows, but are not a carp. However, Koi, very colorful and ornamental fish that are often found in park ponds, are common carp (just a very colorful version).

Grass carp are one of many options used to control nuisance aquatic vegetation in lakes and ponds. Possession and stocking of grass carp is prohibited without a special grass carp permit issued by the DEEP Fisheries Division which may authorize a permit to for "sterile” grass carp to enter the state. For more information about using grass carp, read the article in Connecticut Wildlife Magazine.

Common carp were introduced to Connecticut waters following the Industrial Revolution, originally stocked as a food source. They sustain their own populations by reproducing in the wild. Common carp are often found in four morphological forms, each just adaptations or “morphs” of the fully scaled common carp. The four morphs you are likely to encounter are: 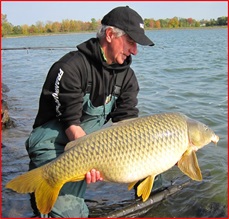 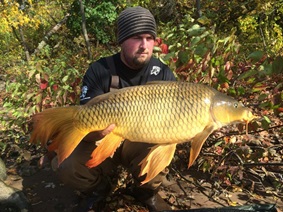 Mirror (a few scales here and there) Leather (no scales at all) 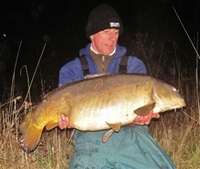 Due to the increasing popularity of carp fishing, the Fisheries Division implemented regulations beginning in 2018 to ensure there would be very large carp for anglers to seek. Connecticut's current carp regulations are:

Most fishermen catch their first carp by chance, usually fishing with bait on the bottom for a different fish, like catfish or bullhead, and a carp picks up the bait and the fight is on! Once you feel how powerful even a 10-pound carp can be, you may not go back to fishing for other species at all. The growing popularity in recent years and the world-class fishery has attracted large carp tournament events held on the CT River in 2008, 2015, 2016, 2018, 2019. These tournaments have attracted carp anglers from around the world. In addition, carp fishing in the CT River was featured in the television series “On the Water” airing July 2016.  You can also watch it via YouTube here: Connecticut River Carp - On The Water TV Season 13 Episode 1.

Equipment: Carp fishing can be as simple or as technical as you make it. Check out our the carp fishing primer in Connecticut Wildlife Magazine. To get started in carp fishing, you only need three things - a suitable rod and reel, bait, and a place to fish. Any rod/reel combo will work, but a fairly long (over 8’), heavy spinning rod with a reel capable of holding 200+ yards of 20 lb monofilament line is a good start. A longer rod is suggested because you will often need the leverage when fighting such a large, strong fish from shore. These fish often “bolt” when first hooked, so unless you are paying attention and grab the rod, it is possible that you could watch your entire outfit fly into the lake! Because of the fish’s spooky nature and tremendous burst speed, many carp enthusiasts recommend a baitrunner style reel so line can leave the spool freely as the carp makes that initial run. Baitrunner reels can be a bit pricey, but investing in a baitrunner reel may be cheaper than having to buy a new rod and reel each time you hook a carp!

Carp have highly-developed sensory organs (barbells), as well as very sensitive mouths which they use to detect food items in muddy substrate. Because of this, if the bait is put directly on the hook as you would for most all other fish species, the carp will often detect the hook and spit out the bait long before the anglers ever feel the hit. To match wits with the finicky carp, avid carp fishermen developed the “hair-rig” to help increase their catch. Simply, the hair-rig is designed to hold the bait on a short piece of line, “the hair”, which extends an inch or so past the hook. Carp will pick up the bait and not immediately notice the hook until it is well inside their mouth. As the carp tries to spit out the hook, the bait just rotates around the hook, keeping the hook just inside the mouth, resulting in a hooked fish!

Baits: There are as many baits for carp as there are carp fishermen and everyone has their secret formulas, but you do not need to get too elaborate to get started. Favorite baits to use are corn, dough balls, and processed dough balls known as “boilies” (they are boiled to make a tougher bait to stay on the hair-rig). Should you decide to use something other than corn, or to not make your own boilies, there are many commercially made carp baits available with a quick on-line search. Remember, carp have very sophisticated sensory organs, so do not be afraid to experiment by adding flavor to your baits, such as pineapple or other fruit juice, different flavored Kool-Aid, anise, or molasses.

Popular locations: You now have your gear and bait, but where should you start looking for carp? Some popular locations are any of the Trophy Carp Waters mentioned earlier, the Housatonic River and its impoundments (Lakes Lillinonah, Lake Zoar, and Lake Housatonic), Aspinook Pond, Hanover Pond, and Coventry Lake, to name a few. Many carp fishermen will “pre-bait” an area prior to fishing so that carp are actively coming to that specific location to feed. Some studies have shown that larger carp are generally caught at “pre-baited” locations. This is most likely a territorial response where the larger carp displace the smaller ones at the food source. Pre-baiting an area is not at all necessary, but doing so can increase the odds of catching fish.

Above all, when fishing for carp be patient. Carp can be caught both day and night, so get a comfortable chair, get your baited hair-rig in the water, throw a few additional corn kernels out in the area for good measure, and wait for the hit.

Bowfishing for carp is a legal method for taking common carp in Connecticut and is enjoyed by a dedicated group of anglers. Bowfishing for carp is exactly as it sounds, you shoot the carp with a bow outfitted with a “reel” to hold the line which is attached to an arrow. The point of the arrow is fitted with a “barb” so that the fish can be retrieved after being shot. Typically, bowfishing is done from a boat and can be done either day or night. Because this is a lethal form of fishing and the carp cannot be released, bow fishermen must be well versed in the specific regulations and possession limits at each body of water they fish. Knowing the regulations will help conserve carp populations and avoid wanton waste of such a valuable recreational resource.

Greater daily limit specific for Bow and Arrow Anglers - The daily creel limit for common carp taken by bow and arrow fishing is twelve (12), not more than three (3) of which may exceed thirty inches in length.

This greater daily limit applies to the following areas:

Caring for Your Catch

Carp can be excellent table fare, and while some folks enjoy a nice carp meal, most fishermen practice catch and release. To ensure fish health when releasing your catch, please remember that carp are large fish and can easily be injured while trying to get that photo or when lying on land. Try and use an appropriate size net and, if possible, keep the fish in the water while you remove the hook and snap a photo. Do not ever pick a carp up vertically by the gill cover! If you want to hold the fish for a photo, do so by cradling the fish with both hands. If you want to weigh the fish, do so in the net or use a sling to keep the fish safe from injury. In addition, carp have three very stout spines located on the dorsal fin and each pectoral fin. These spines are serrated and can get caught in your net, and can also inflict serious pain if you get one in your hand. Be mindful of these spines as you handle the fish and both you and the fish will be fine.