Europe, 1940-41, was a place and time of too few heroes. The world had begun a journey down an unalterable path to horror. We are now very familiar with those events. The descriptions we find in history texts and images that look out at us from preserved film footage enable us to witness that descent into the collective madness of war and genocide. We shake our heads and ask in disbelief how something terrible beyond understanding could have existed 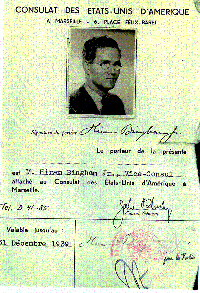 in this world. But, in the face of those horrors, there were many who were courageous, who acted selflessly, who saved lives -- not for any honor or reward, but simply because they could not act any other way. One man who possessed that courage was Hiram Bingham IV.

Harry, as he was known to his family, was born in the summer of 1903, into an old and prestigious Connecticut family. His father, Hiram Bingham III, began his career as an archaeologist and college professor. On an expedition to Peru in 1911, he discovered the ruins of Machu Picchu, the great Inca city of the Andes. Later he entered political life, served as Connecticut's Lieutenant Governor from 1923-25 and was elected governor in November 1924. In December of that year, and before assuming the office of governor, he was elected to the United States Senate in a special election. Harry's mother, Alfreda Mitchell was the granddaughter of Charles L. Tiffany and an heir to the Tiffany fortune; and his paternal grandfather and great-grandfather, Hiram I and Hiram II, were missionaries in the Pacific in the 19th Century.

Following in his father's footsteps, Harry attended Yale and graduated in 1925. After attending Harvard Law School, where he studied international law, he entered the diplomatic service and was posted in Japan, China, Poland, and England, before being named vice consul at Marseilles in 1940. By the summer of 1940, the fall of France was complete and the Vichy Government controlled southern France. Out of concern for their safety, Bingham sent his pregnant wife and four children home to America. He understood the nature of fascism and knew the truth concerning conditions in Nazi occupied Europe. With the outbreak of war, Marseilles, like many other port cities in Europe, had seen an influx of refugees and fugitives, many of them Jewish, desperately seeking a means of escape from the rapidly advancing German armies and inevitable imprisonment in concentration camps. When France fell, their avenue of escape was closed, unless they could obtain a visa that would enable them to leave France.

As vice consul, Hiram Bingham was in charge of issuing visas -- visas that could quite literally mean the difference between life and death. Bingham began issuing visas in June of 1940 to Jews and political refugees alike, on occasion even sheltering them in his home. He did so because he simply believed in his heart that it was the right thing to do and the only thing his conscience would allow. However, his actions were not in accord with the official policies of the United States. Germany, at that time, was 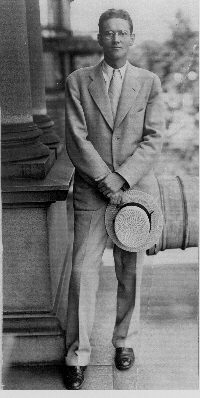 not our enemy. Also, to assist in the smuggling of refugees was a violation of his orders and the laws governing France. When those who were desperate to escape were refused by American consulates in other French cities, they began, in increasing numbers to turn to Bingham in Marseilles. But as his efforts became better known to those in need, the Germans also became familiar with his activities and their complaints found their way to the State Department in Washington.

It is impossible to determine the exact number, but during his relatively brief service in Marseilles, Hiram Bingham was directly or indirectly responsible for saving the lives of perhaps 2000 or more people. Some were or would become famous -- Leon Feuchtwanger, Franz Werfel, Alma Mahler Werfel, Heinrich and Golo Mann, son and brother of Thomas Mann, Max Ernst, Marc Chagall, Andre Breton, Andre Masson, Nobel Laureate Otto Meyerhof, Konrad Heiden, Hannah Arendt, and others. Many more were ordinary human beings fleeing tyranny. Harry's saving work would end in the summer of 1941, when he was relieved of his post and transferred first to Lisbon and later to Argentina. His career in the diplomatic service ended in 1945.

Although family members knew some of the details, the whole story would remain obscured until his youngest son Bill discovered a tightly wrapped bundle of letters, documents, and photographs in a cupboard behind a chimney in the family home. Once opened, that bundle disclosed Hiram Bingham's carefully guarded past. As a consequence of the discovery, Hiram Bingham IV has been reclaimed. He has been honored by many groups and organizations including the United Nations, the State of Israel, and by a traveling exhibit entitled "Visas for Life: The Righteous and Honorable Diplomats." The exhibit records the events of that time and the efforts of Bingham and others who risked and lost so much to help their fellow man.

From the great and comfortable distance of more than half a century, we can clearly know what was right and can condemn the actions of the people and governments that promoted, supported, or condoned imprisonment and murder on such a frightful scale. But faced with a similar decision in the present, when our own lives might be in danger, who among us can speak confidently of the choice we would make? The extraordinary choice of Hiram Bingham was to choose life, to disregard his own personal safety and career, and to do what he could to save others who had no where else to turn. It would take more than fifty years for his deeds to be recognized and accorded the honor they so justly deserve -- recognition that sadly he would not live to see.

It is then, with great pride and admiration, that I dedicate the 2001 edition of the Connecticut State Register & Manual to Hiram Bingham IV, truly a righteous and honorable man.