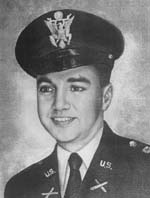 First Lieutenant Lee R. Hartell
Lee Ross Hartell of Danbury was postumously awarded the nation's highest military award, the Medal of Honor, for actions during the Korean War near Kobanson-ni (Hill 700) as a member of the 9th Infantry Regiment.
His citation reads:
1st. Lt. Hartell, a member of Battery A, distinguished himself by conspicuous gallantry and intrepidity at the risk of his life above and beyond the call of duty in action against an armed enemy of the United Nations. During the darkness of early morning, the enemy launched a ruthless attack against friendly positions on a rugged mountainous ridge. 1st Lt. Hartell, attached to Company B, 9th Infantry Regiment, as forward observer, quickly moved his radio to an exposed vantage on the ridge line to adjust defensive fires. Realizing the tactical advantage of illuminating the area of approach, he called for flares and then directed crippling fire into the onrushing assailants. At this juncture a large force of hostile troops swarmed up the slope in banzai charge and came within 10 yards of 1st Lt. Hartell's position. 1st Lt. Hartell sustained a severe hand wound in the ensuing encounter but grasped the microphone with his other hand and maintained his magnificent stand until the front and left flank of the company were protected by a close-in wall of withering fire, causing the fanatical foe to disperse and fall back momentarily. After the numerically superior enemy overran an outpost and was closing on his position, 1st Lt. Hartell, in a final radio call, urged the friendly elements to fire both batteries continuously. Although mortally wounded, 1st Lt. Hartell's intrepid actions contributed significantly to stemming the onslaught and enabled his company to maintain the strategic strongpoint. His consummate valor and unwavering devotion to duty reflect lasting glory on himself and uphold the noble traditions of the military service. 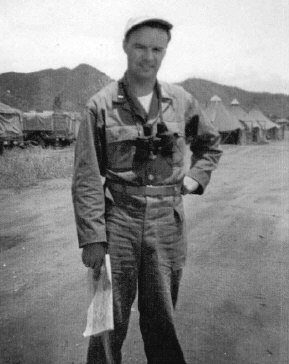 Lieutenant Hartell in Korea
The Connecticut National Guard has named its installation in Windsor Locks in his honor.