Pyrrhotite causes the slow deterioration of the concrete when exposed to oxygen and water. While the presence of pyrrhotite indicates the potential for concrete deterioration, its existence alone does not necessarily cause it.

The cracking starts small and may take more than 10 years to over 30 years to appear. Horizontal cracks or cracks that splinter out like a web are the most concerning. A rust color residue or white powder may appear. The sheetrock walls of a finished basement may need to be removed to examine the concrete. As the concrete deteriorates, it often becomes structurally unsound.

The damage is irreversible. The repair is to fully replace the impacted foundation with a new foundation that does not contain pyrrhotite.

The State of Connecticut is providing financial assistance to homeowners who have a crumbling foundation, due to pyrrhotite, where the home, condo, Planned Unit Development, or home addition was built after January 1, 1983, and before December 31, 2015.


Towns Identified by CRCOG as having been impacted by Crumbling Foundations 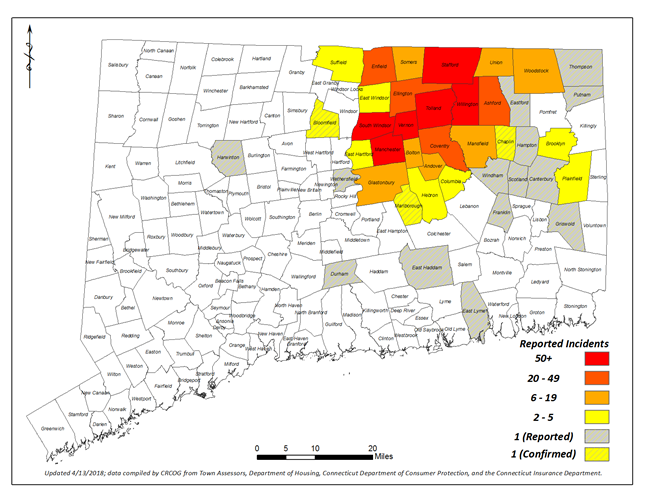 Homeowners who suspect their foundation may be showing signs of cracking should have the foundation tested by a VISUAL test and/or a CORE test. At this time, the only test that can definitively confirm the presence of pyrrhotite is a CORE test.

The State of Connecticut is assisting homeowners, in the affected area, with the cost of testing their foundation.  Two opportunities for testing payment assistance are available.

Eligibility requirements for this program include:

For full details on the program and an application for reimbursement, visit: www.foundationtesting.org or contact CRCOG at 860-724-4277.

II. The State of Connecticut, Department of Housing, through a Community Development Block Grant (CDBG) has provided funding to eligible municipalities for a foundation testing program. A CDBG crumbling foundations testing program may cover 100% of the costs to test a foundation for pyrrhotite, up to $5,000. There may be other qualifiers. Residents should contact the town before arranging any testing.

Residents in Ellington, Stafford and Vernon should apply directly to their town before they begin testing.

Connecticut Public Act 16-45 requires municipal assessors to inspect and reassess residential properties with foundations made from defective concrete at the property owner's request. To request this reassessment, contact your town and submit a written report by a CT licensed professional engineer (PE). The property must be inspected and its assessment adjusted within 90 days after the report has been submitted or the next assessment year, whichever is earlier.

Insurance companies cannot cancel or refuse to renew a homeowner's policy due to a crumbling foundation.  If you believe this has happened to you, you should file a complaint with the Connecticut Insurance Department or call the Connecticut Department of Insurance, Consumer Affairs Unit at 1-800-203-3447.

This bill codifies the residential disclosure report home sellers must provide to purchasers and expands what must be included in it. It includes:

This bill imposes a $12 surcharge on certain homeowners insurance policies issued, renewed, amended, or endorsed between January 1, 2019 and December 31, 2029 to be deposited into the Healthy Homes Fund which the bill establishes.

The bill establishes the Healthy Homes Fund, a separate non lapsing General Fund account to collect insurance surcharge funds to in part help homeowners with concrete foundations damaged from pyrrhotite. Under the bill, within 30 days of receiving the deposit of surcharge funds, 85% of the deposits must be transferred to the Crumbling Foundations Assistance Fund, which is used by the Connecticut Foundation Solutions Indemnity Company, LLC to assist homeowners with crumbling concrete foundations.

EFFECTIVE DATE: January 1, 2019, for the insurance surcharge provisions, and June 2018 for the provisions on the Healthy Homes Fund.

* Requires the captive, among other things, to: (1) establish a volunteer board of directors and allows the legislative leaders to appoint nonvoting, ex-officio members; (2) develop financial assistance eligibility requirements and underwriting guidelines; (3) develop a single, unified financial assistance application for homeowners; (4) provide financial assistance to affected homeowners and help them obtain additional financing if necessary; (6) approve and disburse funds to eligible contractors for repairing or replacing foundations; (7) apply for and receive federal funds; (8) enter into agreements with CHFA and participating lenders to develop additional loan programs for homeowners; and (9) make recommendations to legislative committees to improve the program

* Deems that captive employees and agents are not state employees, but (1) subjects its employees, directors, agents, consultants, and contractors to certain state ethics provisions and (2) allows the Office of State Ethics to enforce these provisions

*Requires the captive to file, in addition to any report required of nonprofit entities, quarterly reports to specified legislative committees on its operations, including town by town information on claims, claim amounts, applications, and application approvals.

* Sunsets the captive on June 30, 2022, or earlier if its existence is terminated by law, and vests all rights and properties to the state at that time

* Allows DOH to apply for federal funds, and requires it to deposit the money into the Crumbling Foundations Assistance Fund

* Requires the Insurance; Finance, Revenue and Bonding; Planning and Development; Public Safety; and Housing committees to, at least annually, hold a joint public hearing on the captive's operation and financial condition

* Creates the Collapsing Foundations Credit Enhancements Program, administered by CHFA, to help homeowners obtain additional funding necessary to replace or repair crumbling concrete foundations and requires CHFA to publish a plain language summary of the program on its website

* Requires personal risk insurance policies (e.g., homeowners) and certain condominium master and property insurance policies to allow suit against insurers for up to one year after the date the insured receives a written denial for all or any part of a claim under a property coverage provision for a crumbling concrete foundation

* Allows taxpayers to reduce their Connecticut adjusted gross income by the amount of any financial assistance received from the Crumbling Foundations Assistance Fund or paid to, or on behalf of, an owner of a residential building pursuant to the bill

* Establishes an eight-member working group to develop a model quality control plan for quarries and to study the workforce of contractors repairing and replacing crumbling concrete foundations; it must report its findings to the General Law Committee by December 31, 2018, at which point it terminates

* Establishes a special homeowner advocate within DOH responsible for, among other things, coordinating state efforts to assist homeowners with crumbling concrete foundations, helping resolve complaints concerning the captive, working with the federal government, and reporting to General Assembly

* Establishes a training program for contractors repairing or replacing these foundations

EFFECTIVE DATE: Upon passage, with the provision allowing suit against certain insurers for up to one year after a claim denial is applicable to policies issued, renewed, or in effect on or after the bill's effective date; and the tax deduction provisions applicable to taxable years beginning on or after January 1, 2017

1. Additional documentation to obtain a certificate of occupancy for a new structure for which a concrete

2. Municipalities, at an owner's request, to reassess residential properties with foundation problems;

3. The Department of Consumer Protection (DCP) to investigate the cause or causes of concrete foundation failure; and

EFFECTIVE DATE: May 2016, and applicable to assessment dates beginning on or after that date, except the provision requiring a report to the legislature is effective July 1, 2016 and the provision about certificates of occupancy is effective October 1, 2016.